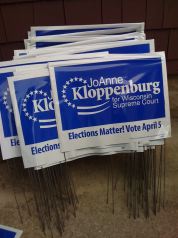 Are You Ready for April 5th?

OK, you may be asking what’s so special about April 5th? It’s true that Pocahontas married English colonist John Rolfe on that day. And FDR signed executive order 6102, which is blowing Glenn Beck’s mind even now because it forbids the hoarding of Gold Coin, Gold Bullion, and Gold Certificates” by U.S. citizens. But that’s not why it’s important to our Blue America community. Can you guess yet?

April 5th is the day that Wisconsin will hold its Supreme Court election and in light of the unprecedented actions of Tea Party Governor Scott Walker, a very important choice will be made that day.

Conservative Justice David Prosser is up for re-election against Assistant Attorney General JoAnne Kloppenburg, and he’s made no bones about the fact that he is a Conservative.

At this moment, the court is divided 4-3 in favor of conservatives and it’s Wisconsin’s first chance to show their support for all public union workers who have been fighting for their right to collectively bargain — and possibly give the court a majority to overturn the law.

The Koch Brothers and their puppet Governor can fill their pockets with more of your hard earned money. Aren’t you tired of being treated like an ATM machine for corporations?

Maybe you’re thinking, “why should I care? I don’t live in Wisconsin?” It’s a fair question. The problem is that Walker’s extremism is spreading like Ebola and it threatens the rights of every working family in the United States.

Gov. Paul LePage (R) of Maine, who recently pulled down a mural depicting working-class people because hard-working people must terrify him and his Republican legislators, who are trying change child labor laws so they can make it legal to increase the amount of hours a child can work and decrease their hourly wage to 5.25 an hour for the first 180 hours.

Are you almost there?

Florida Tea Party Governor Rick Scott just signed an executive order requiring new state workers to submit to mandatory drug testing which could cost the state millions of dollars. Oh, isn’t every state in financial trouble right about now hence all these radical steps to cut costs all over the country?

What’s next, maybe drug testing 5-year-olds if they cry too much in school? And guess what? There happens to be a company in Florida named Solantic and one of the most popular services they provide is drug testing. Oh, and guess who co-founded it. Yep, Rick Scott. (Sure, he had to divest his interests in it to be Governor. But wouldn’t you know it — the controlling shares are now are now entrusted to his wife.) No conflict of interest there, right?

I could go on and on. but I know you’re in now.

So please, GOTV for Assistant Attorney General JoAnne Kloppenburg; defeat Conservative Justice David Prosser and be at the forefront of leading American back on the track to normalcy before we’re all forced to wear “I Love The Koch Brothers” T-shirts.

And if you can spare to throw a few bucks to Blue America PAC to help us organize against these draconian measures, we’d appreciate it.