The first time I mentioned Ilya Sheyman, the progressive Democrat running for the northern Chicago suburban seat held by GOP freshman Robert Dold, it was in a long and rambling post lashing out against conventional wisdom. When I finally got to Ilya, former Field Director for Democracy for America and, more recently, National Mobilization Director at MoveOn, who Blue America was urging to run against Dold, he quoted Paul Wellstone to me:

“Politics is not just about power and money games, politics can be about the improvement of peoples lives, about lessening human suffering in our world and bringing about more peace and more justice.”

Candidates with this kind of mindset are candidates Blue America is looking for to help solve the country’s problems. That’s why we’re enthusiastic about endorsing him today and why we’d like to invite you to meet him in the live forum in the comments section below.

Until Dold’s vote to phase out Medicare and replace it with a pathetic voucher system so that the wealthiest Americans get more tax breaks, not many people had heard of him outside the 10th CD between Arlington Heights and Waukegan. But that triggered an angry reaction at Dold’s town hall meeting in Buffalo Grove last week and now Dold has become another right-wing poster boy for Paul Ryan’s dystopian vision of a mean, dark, reactionary America.

Rep. Robert Dold (R-Ill.) cut a presentation on the federal deficit short at a town hall meeting he held last week, after audience members began firing questions at him about the Ryan budget and its changes to entitlement programs, including Medicare and Social Security, according to the Chicago newspaper the Daily Herald.

Senior citizens in the audience expressed their discontent with turning Medicare into a voucher program, calling the change a “shell game” that would bog senior citizens down with uncertainty in dealing with private healthcare companies.

And senior citizens are getting to know Dold better now that he’s been in Congress for 4 months. He may be trying to hide his support for dismembering Medicare but he’s surprisingly open about his contempt for Social Security and what he insists is the need to trim it back. Dold has been the perfect little rubber stamp for the radical House leadership, buying into all their harebrained schemes. “Rep. Dold and the right wing of the Republican Party,” Ilya confirmed “are hell-bent on dismantling Medicare, Medicaid, Social Security and eliminating the foundations of the American Dream that have made millions of middle-class lives possible– and we can’t let them get away with it… The fact that he continues to advocate for cuts in Social Security benefits shows just how out of touch he is with the voters of the 10th District [and] his vote for the radical Republican budget that ends Medicare in order to give tax breaks to giant corporations and the wealthiest 2% of Americans should put to rest any notion that he actually cares about the deficit.”

A few weeks ago a staffer for a DCCC-approved candidate called and asked if Blue America would endorse him. I asked to speak with him and, embarrassed, the staffer said he isn’t familiar enough with the issues to speak with the media yet but he’s learning them. That’s not the kind of candidates Blue America is looking for and that’s about as far from what Ilya Sheyman is all about as you can be. “I am in this race,” he told us, “because I believe that government and politics are about doing good. They’re about helping every man, woman, and child with a dream– and the willingness to work for it– achieve his or her potential… I’m sick and tired of a Democratic Party that on issue after issue seems to pre-negotiate, pre-triangulate, and pre-capitulate rather than standing up for the progressive values we know make a difference in real people’s lives.” This is what he’s been doing as a grassroots activist for years. We need people like Ilya in Congress to save us from Beltway Democrats who are chosen by the Establishment for one reason and one reason only: an ability to self-fund campaigns– i.e., whore themselves out to corporate interests. That isn’t Ilya:

“I can’t wait to organize together with grassroots advocates in our community, and allies inside Congress, to pass a real jobs bill that will put millions of Americans back to work and pave the way to a new green energy economy.

“Rep. Jan Schakowsky’s ‘Fairness in Taxation Act’ is a model of the kind of progressive legislation we should be fighting for, and I’m eager to work alongside her to bring back fairness to our tax code so we can invest in America again.” 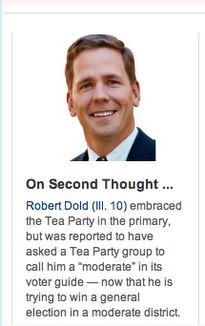 Dold was caught asking the Tea Party to not publicly endorse him in the general election because it could blow his cover as a fake moderate. Since getting into Congress with a narrow 51-49% win, in a district Obama won with 61% in 2008, Dold has blown his own cover, voting for Ryan’s toxic budget, voting to renew the Patriot Act and just marching along in lockstep to everything John Boehner and Eric Cantor wanted him for. This time Chicagoland voters get a real choice. Please help us welcome Ilya to the Blue America family and, if you can, please contribute to his campaign through our ActBlue page.

An active admirer of Raul Grijalva’s and Keith Ellison’s Put America Back To Work Act, Ilya will be working inside the Progressive Caucus helping to advance real solutions for working families. It’s what he’;s campaigning on and it’s what has drawn him into politics. And it’s why Blue America has endorsed him.

If Herschel Walker loses on Tuesday, he can move back to Texas and become a political science professor at Messenger College in Bedford pic.twitter.com/B3X7OXzVu9