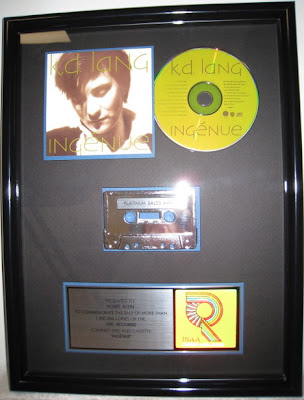 I was the general manager of Sire Records when k.d. lang released her platinum smash album, Ingénue in 1992. I worked on the amazing video for “Constant Craving,” which I wanted to use in this post. But Warner Bros Records, a company long since pillaged by Mitt Romney’s Bain Capital and sold off for spare parts to the Russian Mafia, doesn’t allow embedding for the clip on YouTube. So… below, the song that inspired the Rolling Stones’ “Anybody Seen My Baby” 5 years later– yes, k.d. gets writing credit on it– is the live Grammy Awards performance. In fact, the song won the Grammy for Best Female Pop Vocal Performance.

Aside for my love for k.d. and for her music, why am I bringing this up now? Glad you asked. k.d. is also one of Ed Potosnak’s favorite all-time artists and, as you probably know, Blue America has endorsed Ed for the New Jersey congressional seat currently held by anti-health care reactionary Leonard Lance. See that platinum award disc up top? k.d. gave that to me after her album sold a million copies. This week she agreed to personally autograph it, not to me, but to whomever wins our Ed Potosnak contest. She’s playing at the Mayo Performing Arts Center in Morristown, NJ on September 22. So… we’ll pick a lucky random winner on September 20 and Ed will personally take the plaque backstage so k.d. can sign it to the winner. So, the obvious question: how do you enter?

That’s easy: just donate to Ed’s campaign here— any amount; after all, we’re not Republicans– and one winner will be chosen at random to get this very special Thank You from Blue America. We did a similar kind of contest for a signed Green Day guitar and raised over $5,000 although the winner just gave $10. Make sure you contribute between now and September 20th, either on the linked ActBlue page or by check to Blue America PAC, PO Box 27201, Los Angeles, CA 90027.

But, apart from wanting a memento of k.d.’s incredible career, why donate to Ed’s campaign? We’ve written about him many times before but you can get to know more about him from this guest post he wrote in July. Ed’s a science teacher and yesterday he told me that “our future is in today’s classrooms. All across our nation great disparities exist between the educational experiences of some students and others. Not only is it not fair, these inequities hurt our future. Republicans have shown their disregard for our future time again by slashing aid to schools, teacher bashing, and cutting support for our colleges. For America to remain economically competitive in the global economy, Congress needs educators like myself to make sure every child is treated fairly and has access to a high quality education.” Equality of all kinds is a hallmark of Ed’s campaign. He also said that “our nation’s diversity is one of our greatest strengths and in Congress I will work every day to ensure every American is treated equally. It is not acceptable to allow discriminatory policies to be on the books. As an openly gay man, I have experienced institutional discrimination and am committed to making sure it ends for all our communities.”

Again, you can contribute to a stalwart and dedicated New Jersey progressive, Ed Potosnak, here at the Blue America page, and we’ll enter you in the running for the k.d. lang RIAA platinum award for Ingénue. While you think about it, see if you can resist this:

Sheriff Nelson is speaking to an anti-government extremist group this week whose members have shown up armed to the homes of public officials including a police officer. https://t.co/Q0DdQnA0j2