Today, January 21, is the two-year anniversary of the absolute worst and most dangerous Supreme Court decision of our lifetimes, Citizens United v. Federal Election Commission. We decided it would be the perfect time to reiterate Blue America’s enthusiastic support and endorsement of Orlando Democrat Alan Grayson and to invite him here to Crooks and Liars for a question-and-answer session.

Why Alan? He was one of the first victims of an unrestricted opening of the spigots of corporate money in a congressional race. According to a Politico article late in the campaign in 2010, almost 20% of all of the independent expenditures in House races in the entire country were deployed against Alan. His district was flooded with an unrelenting radio and television smear campaign by the corporations who didn’t appreciate his hard work on behalf of consumers and workers. The average person in Orlando saw 70 negative ads against Grayson– $2 million of which was paid for by the Koch Brothers, $2 million by the health insurance industry and another million from the NRCC. The cash that flowed into the district from the Chamber of Commerce and Rove’s band of cutthroats was a direct response to Alan’s reform efforts on the House Financial Services Committee and because he was the most effective national Democratic spokesperson in Congress. The DCCC, of course, offered him no help whatsoever in defending his seat. 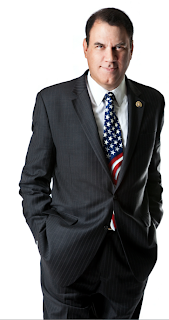 Two years ago there were only two Members of Congress at the Supreme Court when the narrow 5-4 decision striking down the provisions of the McCain–Feingold Act that prohibited all corporations’ and unions’ unrestricted election spending on advertising was read out: Alan and Mitch McConnell. I can imagine McConnell squealing with delight. Grayson had quite a different reaction. He warned later that evening on Countdown that “if we do nothing, you can kiss this country goodbye.” (See video above.) I don’t think he actually meant the physical country itself– just democracy, so loathed by the plutocratic elites, and all the benefits democracy brings with it.

“Seeing it coming,” he told me when discussing the ruling, “and assuming the worst, I had introduced four anti-Citizens United bills the week before, and introduced four more afterward. We called this our Save Democracy Platform. The core of three of these bills made it into the DISCLOSE Act.” These were the bills Alan introduced:

The Business Should Mind Its Own Business Act (H.R. 4431): Implements a 500% excise tax on corporate contributions to political committees, and on corporate expenditures on political advocacy campaigns.

The End Political Kickbacks Act (H.R. 4434): Prevents for-profit corporations that receive government money from making political contributions, and limits the amount that employees of those companies can contribute.

The Corporate Propaganda Sunshine Act (H.R. 4432): Requires publicly traded companies to disclose in SEC filings money used for the purpose of influencing public opinion, rather than for promoting their products and services.

The End the Hijacking of Shareholder Funds Act (H.R. 4487): This bill requires the approval of a majority of a public company’s shareholders for any expenditure by that company to influence public opinion on matters not related to the company’s products or services.

Blue America was urging Alan to run again even as the votes were being counted in 2010. And we are determined that this year he’s going to be back in Congress– and this time in a solid Democratic district (the new 27th based in Orlando). Please help us raise him the money he needs to beat back the Kochs and the Roves and the corporate special interests.

He recorded this for us last night:

We’re going to the chapel because love is in the air today at Mike’s Blog Round-Up! “Now anyone can catch the bouquet!,” @Tengrain says. https://t.co/zvOu4kL9p9

"Every accusation is a Confession." https://t.co/MWM84gHMRo