Blue America Is Giving Away An Autographed Barenaked Ladies Guitar

I first met the Barenaked Ladies even before someone shot the funky video above. “If I Had $1,000,000” was on their first album, Gordon but American media showed no interest in the song, the album or the band. The band, undaunted by their lack of success, kept playing shows and building a grassroots following across America. I remember, several years– and several albums– later bringing a program director from a radio station in Columbus, Ohio to a concert. It was in the city’s biggest indoor concert venue, the Celeste Center, and the 10,200 tickets had all sold out in advance. The program director was stunned. “How could this be happening in my city without us even knowing about it?” he wondered aloud. His station helped “break” the band– at least to the mainstream. But it was the grassroots and the hard work that really broke the Barenaked Ladies even before the 1998 platinum smash hit “One Week” from Stunt.

Dr. David Gill and author and activist Norman Solomon have been working the grassroots angle for a very long time. And both are on the verge of national prominence. When I asked Ed Robertson if it would be OK for me to give away the beautiful Fender Strat all the members of the band has signed and given to me when I retired from Warner Bros, he replied immediately, “Happy to help out the ailing American political system wherever we can!” 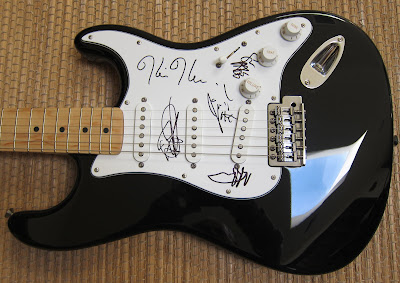 A few years ago the Barenaked Ladies sang in one of their breakthrough hits about what they’d do with a million dollars:

To each his own. Blue America and Progressive Democrats of America have something different in mind for a million dollars– helping elect two of the most outstanding progressive candidates running for office anywhere this cycle, Norman Solomon in California and Dr. David Gill in Illinois. But both organizations are grassroots groups and neither one of us– nor even both of us together– has a million dollars. Instead we have a beautiful Fender stratocaster guitar that has been autographed by each member of the Barenaked Ladies. Would you like that… instead of an emu?

We need to raise some money to help Norman and David win their tough races. David has already won a difficult primary against a conservative, Machine-backed Democrat, who finally conceded Friday. Now he’ll face whomever the GOP Machine forces down Republicans’ throats. Norman still has a primary ahead of him– and if he comes out in the top two, as is expected, he’ll face off against a more Establishment character for a seat in Congress.

David is in an open Democratic-leaning district, so as long as he can get his message out, he’s likely to win in November. And Norman’s district is one of the most Democratic and progressive districts anywhere in America. Both candidates have been endorsed by both PDA and Blue America. This is the first time our two groups have ever gotten together for a fundraising effort. If you contribute any amount to these two candidates on this ActBlue page you could be the lucky winner of the Barenaked Ladies guitar.

It doesn’t matter if you donate $10 or $1,000. Everyone has an equal chance to win the guitar. Just go to this page any time this week and donate to both the candidates. At the end of this week we’ll pick one person at random and send him or her the very special Barenaked Ladies thank you gift– the beautiful Fender Stratocaster guitar autographed by each member of the Barenaked Ladies (shown in photo, above).