The first time he ran for Congress, Alan Grayson lost the primary. Two years later Blue America encouraged him to run again and he did. Derided by the political Establishment in Florida and in DC, he beat their favorite in the primary and went on to beat the incumbent Republican congressman in the November general. He then went on to inspire millions of Americans desperate for political leaders who could and would stand up to the conservative consensus that dominates Beltway politics. And when Grayson lost in 2010, he started working on the 2012 race. Blue America was with him every step of the way.

Yesterday, Grayson said in a statement that speaks volumes about his dedication to the ideals embodied in the men and women who put him back in office:

“Let’s not fall into the trap of thinking that one Democrat is as good as any other, that we’re all interchangeable parts. We’re not. Some of us have a head, and a heart, and a spine, and some of us don’t. Blue America concentrates on helping the Democrats who deserve our help, the Democrats who can make a difference. Blue America’s encyclopedic knowledge of every Congressional race means that they do your homework for you. When you support Blue America, you’re supporting the best of the best, in the most important races in the country. It sure made a difference in our election.”

And Alan wasn’t our only big win this cycle. After we helped a young reform-minded El Paso City Councilman, Beto O’Rourke, oust longtime corrupt incumbent Silvestre Reyes in a primary that sent shock waves through the DC Establishment, Beto went on this past Tuesday to roll up an awe-inspiring two-to-one landslide, beating his Tea Party opponent 65.5 to 32.8%. Aside for raising money for Beto, we also introduced him to Alan Grayson and Jared Polis so that he would have a base among other reform-minded Democrats in Washington and not just the corrupt, corporate-oriented glad-handing party leaders.

As you know by now, all three of the people Blue America backed for Senate — Bernie Sanders, Elizabeth Warren and Tammy Baldwin — won incredible victories. Bernie was reelected with over 70% of the vote. Elizabeth was the only Democrat to dislodge a sitting Republican senator — Wall Street’s favorite member of the Senate, no less — and Tammy Baldwin beat back a four-term governor to become Wisconsin’s first woman senator, and the first openly gay person to even win a Senate seat in America.

In 2010, Annie Kuster and Rep. Carol Shea-Porter were both victims of the Tea Party wave that swept over New Hampshire. Tuesday that wave reversed itself, and both outstanding grassroots progressives won congressional seats and helped turn New Hampshire dark blue again– with a new Democratic governor and an overwhelming victory in the state legislature. And across the country in California, state Senator Alan Lowenthal, a principled and determined progressive, who got no help from the DCCC, won a powerful 10-point victory over Climate Change-denier Gary Delong.

Blue America is very proud of all our winners, of course — and very proud of our members who gave and gave and gave and gave so generously and so consistently. We’re also incredibly proud of the candidates who didn’t win their races but who fought hard, usually against overwhelming odds and with no help from the DCCC or the Beltway Establishment or the state parties that take their cues from Washington. Rob Zerban gave Paul Ryan the biggest fight of his career and came closer to ending it than anyone who’s ever challenged him before. Rob will be back.

And Rob isn’t the only one we will be working with again. Some of our youngest first-time candidates — Aryanna Strader, Lee Rogers, Nate Shinagawa, Nick Ruiz — have assured me that what we’ve worked so hard to build won’t be wasted. Lee took on the powerful and entrenched chairman of the House Armed Services Committee and gave him the first close call of his long, corrupt career. Will McKeon even run again? None of these candidates had any help from the DCCC; all of them outperformed expectations and made a mark. The morning after his near victory over Tea Party debt collector Tom Reed, the DCCC asked Nate Shinagawa to suit up for 2014, which indicates that might actually support him next cycle. I’m certain, with your help, Blue America will.

Let me share with you a note I got on Wednesday morning from Aryanna Strader our candidate in PA-16, who waged a lonely battle against entrenched incumbent Joe Pitts:

6:30 AM and the morning after a hard fought election. The sun just barely peeked out of the grey clouds and I heard the rustle of bed sheets and small voices. I walk into my children’s room to talk to them. The first words out of their mouths: “Mom! Did ya win?” And unfortunately my response was, “Not this time.”

As the words left my mouth I saw faces sink and tears come to the eyes of my 7 year old son. “But Mom, you worked so hard, I saw it, people believe in you. How come you didn’t win?”

I sat for a moment to try and figure out how to best explain this to my kids. As their eyes watched me and their arms were around me I realized just a few months ago my son had already given me the answer.

What I explained to Donovan was that this is just the beginning. The hard work and effort of everyone involved in this campaign, from him and his sister, to the countless volunteers, to my fellow veterans across the Nation, is not for loss.

No matter where the next mission takes us, we are more prepared than ever before. We know that the challenges we are facing as a Nation are great and I will keep fighting for my fellow veterans to ensure that when they return home they get the help they need and deserve. I will continue to fight for those in poverty because I know there is a little girl out there who is just like me… ready to work hard to lift herself up if only we’d give her a fair shot.

For people like my mom who worked their entire lives, just so they could take care of their families and now, all they want is to retire with dignity and without struggle. And for the women who came before me, blazing a path in the fight for equality, for fair pay, and the right to choose.

We owe it to them all.

With that, I want to you give you so much of my thanks and gratitude. It is all your support during the course of this campaign that I know this fight won’t end just because an Election Day has passed.

Donovan is right: Good guys do always win in the end and with your help, the good fight ahead of us all will prove it. 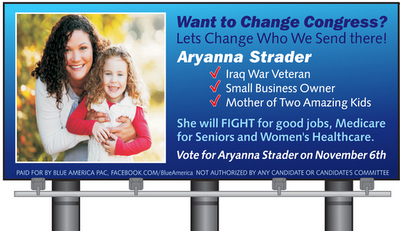 And we’ll be there for her. And for Rob Zerban. This is what he said on election night: “This fight was never about a single election or a single person. This campaign was about the middle class, working people, and the American Dream itself. So we must be proud of this campaign and this movement we’ve built together. And we must not allow these efforts to have been in vain, because the people of the First District deserve representation that belongs to them, not to the moneyed and powerful special interests. You have my word, I will remain a part of that fight. Earlier tonight, I left a message for Paul Ryan to concede this election. But there is a grander, much larger battle ahead of us– and that battle, I do not concede.”

[Cross-posted at Down With Tyranny]