Meet Eloise Reyes, The Progressive Candidate Running For Congress In The Inland Empire 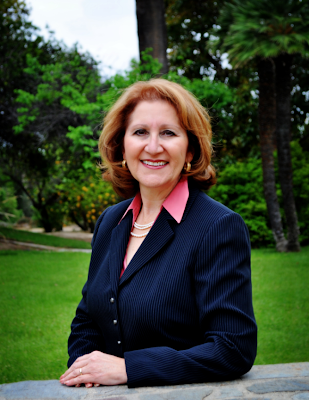 This week the Blue America team met with Colton attorney Eloise Gomez Reyes who’s running for Congress in California’s 31st District. This is the only deep blue district in America with a Republican incumbent. The reason right-wing extremist (and carpetbagger) Gary Miller won last year is because the new jungle primary functioned badly and resulted in the two top vote getters both being Republicans. So while 57% of the voters were casting their ballots for President Obama in the general election, there was no Democrat on the congressional ballot. The weak candidate the DCCC picked, Pete Aguilar, had managed to lose to both Republican contenders, even in Redlands, where he had been appointed mayor. CA-31, which boasts a PVI of D+5, starts at Upland and Rancho Cucamonga and heads west along the 10 and 210 Freeways towards San Bernardino, Colton, Loma Linda and Redlands. The race there has been identified as one of the top five opportunities in the country for Democrats to take back a district, and with only a net of 17 seats needed to turn the House blue, this is a race that matters and that Blue America has big plans for.


Eloise Gomez Reyes is the grassroots progressive candidate running in CA-31, the woman facing a tough primary challenge from the same empty suit who was rejected by voters in 2012. Steve Israel, of course, refused too even meet with Eloise and anointed Aguilar the Democratic candidate, basically telling Democratic voters in CA-31 to shut up and do what they’re told from DC. As Israel is about to find out, it’s not that kind of district. After our meeting, we asked Eloise to consider the question: Where do progressives fit into California’s jungle primary system? This is her response:

With the passage of Proposition 14 in 2010, California adopted what is commonly referred to as the “jungle primary”– a nonpartisan competition in which the top two vote-getters in a race advance to November regardless of party affiliation. The jungle primary system is designed to push candidates toward the middle. In theory, it makes politics more representative by crafting candidates, and ultimately elected officials, whose moderate stances appeal to a wider base of constituents.


But what happens when a Democrat is running in a truly blue district? Does the candidate with the backbone win the election, or does the catch-all candidate with most manufactured platform take the day?


California’s 31st congressional district is one such case study.


In the 2012 election, Barack Obama won over 57 percent of the vote in CA-31, yet the district sent a far-right Republican to Congress. In fact, two Republicans won in the primary election and faced off against each other in November. The unthinkable happened in CA-31 in 2012 because a field of weak Democrats cleared the way for two Republicans to fight it out in the general election.


CA-31 walked away from the 2012 election with a PVI of D+5, a radical Republican Congressman and proof that diluted platforms lose elections.


Despite lessons learned, Washington Democrats are lining up to run he same career politician for this seat in 2014. Pete Aguilar, the “moderate” Mayor of Redlands who came in third in his own hometown when he ran for Congress in 2012, has entered the race under the handling of the DCCC. And NRA-backed Joe Baca, who served in Congress and lost his seat in a neighboring district in 2012, is looking for a second chance here in CA-31.


This is a district that is bright blue. There is no reason for a so-called “moderate” Democrat– let alone a far-right Republican– to represent it.


Voters here want, and need, a progressive in Congress. The Inland Empire currently leads the nation in poverty. San Bernardino County, once a thriving hub of commerce and transportation, has suffered the consequences of our crumbling national infrastructure. Its unemployment rate has risen to 11.6 percent in 2013, and more than 220,000 Inland Empire homes were seized by banks and sold out of foreclosure over the last five years. With Latinos making up 34 percent of registered voters in CA-31, our district must be represented by someone who will fight for comprehensive immigration reform, and our senior and veteran populations need someone who is going to not just defend, but expand, their Social Security benefits.


This race is about more than providing another career politician with the next step on his professional ladder. It’s about making life better for people who desperately need a voice in Congress.


And I am the voice of California’s 31st raised in the Inland Empire. I was born and raised in the Inland Empire. I began working the fields here as an onion topper at the age of 12 and held up to three jobs at a time to put myself through college and then law school. Rather than leave my community’s challenges behind, I returned home to serve my community as an attorney. I became the first Latina to open and manage my own law office in the Inland Empire and for nearly three decades, I have volunteered with Legal Aid to provide pro bono legal services to families in need here in our community.


For me, the lesson from the 2012 election in CA-31 is that not all Democrats are created equal. And that’s a good thing. I am proud to be running as the progressive in this race, and I am ready to serve my district as a Member of Congress beholden to no one other than my community.


I invite you to visit my website at www.eloiseforcongress.com. We are hard at work winning this seat back and need you on our team!

And contributions to Eloise’s campaign can be made at the Blue America ActBlue page starting… today!