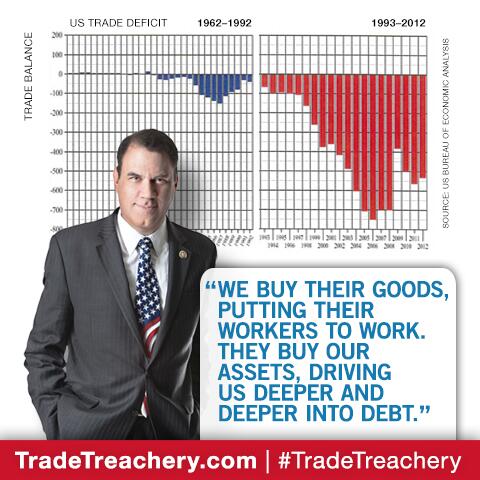 In recent days, you’ve probably heard the barrage of lies Wall Street’s Chuck Schumer has manufactured in his vicious and bitter campaign against Alan Grayson’s run for the open Florida Senate seat. Grayson is basically ignoring Schumer and the DSCC and going about his work on behalf of his Florida constituents. He has, for example, been leading the battle in the House to stop TPP Fast Track Authority. And Sunday, he sent a pretty bold letter to his supporters on behalf of that battle:

Under the First Amendment, you have the right to petition your government to redress your grievances.

Now would be a good time to do that. Today.

According to public reports, the 18 Democratic Members of Congress listed below are leaning in favor of voting for “Fast Track,” legislation that would prevent Congress from debating or amending whatever the Executive Branch calls a “trade bill.” As a public service, we provide you their office phone numbers.

Call one; call them all. Call as many as you want. Exercise your constitutional right to redress your grievances. Make them listen. (By the way, the system is rigged so that you can’t send them an e-mail unless you are a constituent. So you have to call.)

Here are some things that you might explain to them about this bad bill:
(1) Our trade debt stands at eleven trillion dollars ($11,000,000,000,000.00). That’s more than $35,000 for every human being in America– including you. “Fast Track” would pave the way for new trade bills that would increase that. How are we ever going to pay that money back?

(2) Fast Track applies to whatever the Executive Branch calls a trade agreement, even if it has nothing to do with trade.

(3) Fast Track unconstitutionally restricts Congress from holding hearings, conducting investigations, debating a bill and offering amendments– basically, its job. In fact, it could restrict each House Member to only 83 seconds of debate.

(4) No other bills get this special treatment– not bills on taxes, or Social Security, or defense, or transportation, or healthcare. Nothing.

(5) Fast Track applies to trade bills that the Executive Branch hasn’t even released to the public.

(6) None of the “standards” that Fast Track sets for trade agreements is enforceable– not one single standard.
Alternatively, you can just say that you’re tired of Middle Class America getting hosed.

But whatever else you say, make sure you say this: NO on Fast Track!

Blue America has a list of incumbents who are fighting for progressives values along with Grayson. Wall Street would like to defeat every one of them and several are already under attack from Wall Street Republicans and/or from Wall Street Democrats. Take a look at the list and please consider encouraging their fight against Fast Track with a contribution to their reelection campaigns.