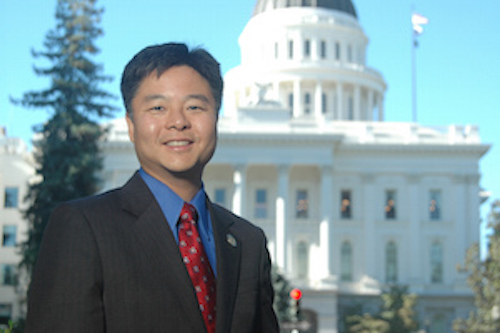 Last cycle we asked you to chip in and help Ted Lieu win the Los Angeles congressional seat from which Henry Waxman was retiring. With your support, Ted won a convincing victory. So, how do we know what’s going to happen after someone gets elected? In Ted’s case, his record of accomplishment as a state legislator was so overwhelming that we had a powerful feeling he would make an exceptional Member of Congress. We were right.

We think he’s worth supporting again. Can you pitch in to help him make his quarterly goals?

He’s been more than we could have hoped, getting elected freshman class president in his first week on the job and working effectively on one tough issue after another. The easy stuff is never where Ted puts his tremendous energies. Just as he did in California, Ted introduced the first federal ban on LGBT conversion therapy, which applies to adults as well as the transgender community. And, again, as he did in California, Ted introduced the Climate Solutions Act of 2015, which takes California’s successful approach to climate change and takes it nationwide. Last week he introduced and passed an amendment that cut the federal marijuana eradication/suppression programs in half and his amendment redirected the funding to help child victims of domestic violence and child abuse.

Ted isn’t taking cautious nibbles around the periphery of problems. He was the first Democrat to oppose the proposal to send US ground troops back to Iraq. At the same time, he has been one of Congress’ loudest and most effective voices against granting Fast Track Authority to the White House on the TPP, a principled position that hasn’t endeared him to the Establishment.

“One of the main reasons I ran for Congress,” he told us, “was to take on the NSA and our out of control spying-industrial complex. From bipartisan letters I have written to the NSA to my public speeches and comments to my advocacy in the press (such as on MSNBC with Chris Hayes), I have worked across the aisle inside Congress to reign in the NSA for the first time in decades. Although I don’t think the reforms went far enough, at least it is a good step in the right direction. And there is more to come.”

And that was just the beginning. “Another reason I ran for Congress,” he told us, “was to accomplish comprehensive immigration reform. I am also passionate about combatting poverty and am fighting to increase funding to poverty programs.” Below is from an OpEd Ted wrote with Hugh Evans, CEO of the Global Poverty Project:

This year, almost 60 million primary school-age children will have no access to school. While the world has made progress to get more kids to school since 2000, the severe lack of financing for global education continues to waste global talent and inflicts a lifelong sentence of poverty for those without an education.

…[I]mproving education worldwide actually helps American security. An uneducated child grows up to be an uneducated adult, and large adult populations that are uneducated and impoverished are destabilizing for countries and regions. With this in mind, our nation’s security increases when there is more stability in the world.

Improving education worldwide also boosts the American economy. Just one year of primary school increases the future earning potential of a boy in a developing nation by 5% to 15%. The increases for a girl are even greater. Millions more educated children growing up to be educated adults would have a sizable impact on economies in the developing world, which means greatly increased global economic opportunity for America.

This year is a historic opportunity for the movement to end extreme poverty. In September, world leaders will approve the Sustainable Development Goals, which we expect to target education with the objective to give every child 10 years of free quality education. Investing in education is a clear prerequisite to achieving all other sustainable development goals and ending extreme poverty by 2030… The United States must do more to help empower communities to lift themselves out of poverty. It’s good for children and good for America.

Ted, in fact, has been so busy doing the peoples’ business that he hasn’t spent the time the Leadership insists on raising money for reelection. Would you help Blue America help Ted make sure he closes out the fundraising quarter with a decent amount? You can contribute to his campaign here.