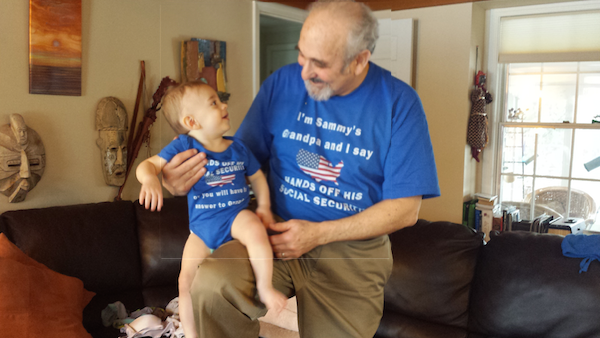 NY-24, the congressional district centered on Syracuse New York, is the bluest district (D+5) in the entire country represented by a Republican– thanks in no small part to the deranged insistence from the DCCC that only conservative DINOs should run there. Obama won the district twice, in 2008 with 56% and in 2012 with 57%, and this cycle a sterling progressive, Eric Kingson, is the Democratic candidate (although the DCCC has been consistently threatening to dig up an unspecified conservaDems to run).

There is no stronger and no more knowledgeable champion of Social Security anywhere than Kingson. And that’s something to especially take account of today, August 14– the 80th anniversary of the most popular social program in history. “Nothing has done more,” Eric tells us, “to advance economic justice for older Americans, persons with severe disabilities, children whose parents die or are work disabled, and surviving widows and widowers. Social Security is the nation’s most effective, popular and efficient (less than 1% in administrative costs!) public innovation. It rendered fear of the poorhouse in old age and necessity of giving up children to orphanages by a surviving parent lacking reliable income relics of the past. It institutionalized retirement for the middle class, not just the rich. Today, 60 million Americans receive monthly benefits, mostly older persons but also 9 million persons with disabilities and more than 4 million children. Extraordinarily popular across all political and demographic groups, Social Security is the poster child for ‘government that works.’  It is also valued because it gives expression widely-shared beliefs– responsibility to care for our parents, children, neighbors and selves; responsibility to work hard and, as a result, a right to benefit from that work; human dignity.”

The hard work of progressive organizations like Social Security Works, co-founded by Eric Kingson, stopped the cuts proposed by George Bush, Paul Ryan and the Republican Party by rallying the voices of citizens and exposing the real fraud– misinformation and deceit perpetrated by ideologues to dismantle our Social Security and Wall Street bankers who want to pull more money out the pockets of the American people.

Truth is, the main things wrong with Social Security are that its vital but modest benefits, averaging just $16,000 a year, are too low; its inflation protection falls short and it doesn’t provide several benefits such as paid family and sick leave. We can and should expand Social Security. We are a rich nation and can afford such expansion by “scrapping the cap” (currently $118,500) on payroll contributions so that millionaires and billionaires pay the same rate on all their earnings; and other modest changes such as counting dividend, interest and other income from assets for Social Security purposes for persons with yearly incomes above $250,000.

“Nothing,” Eric told us, “has been more disliked by those wanting to shrink government and turn back our nation’s progress. From Republican presidential candidate Alf Landon charging in 1936 that FDR’s Social Security was a ‘fraud on the working man’ to the Koch Father and Brothers efforts to dismantle Social Security to Bush’s and the GOP’s effort to privatize, and, more recently, to the use of phony austerity politics to legitimate huge cuts, the ideological opposition has been relentless, deceitful and, thankfully, always defeated. And soon we can expect an effort to turn a minor rebalancing between Social Security’s two trust funds– one that has taken place 11 times before without fanfare– into a debt-ceiling-like hostage-taking crisis to provide another opening to cutting Social Security, most likely in the lame-duck session following the presidential election.”

So, this month, honor Social Security’s 80th anniversary by making a contribution to a real Social Security champion, Eric Kingson, who is running for Congress.

You’ll be getting a committed activist with serious Social Security expertise as scholar, staff advisor to two presidential commissions addressing Social Security and co-founder of one of the nation’s most effective public interest organizations. Eric has worked effectively to stop cuts and help lay a foundation for expanding our Social Security system, an idea that is being advanced by the Sanders, Clinton, O’Malley campaigns. His most recent book– Social Security Works! Why Social Security Isn’t Going Broke and How Expanding It Will Help Us All — tells how, working together, we can expand Social Security for ourselves, our children and grandchildren.

Let’s help put him into position to keep that expansion in the mind of the Members of Congress who will make that decision. You can support Eric Kingson’s campaign on the main Blue America ActBlue page. Three of today’s contributors– chosen randomly– will get autographed copies of Kingson’s Social Security book from Blue America.