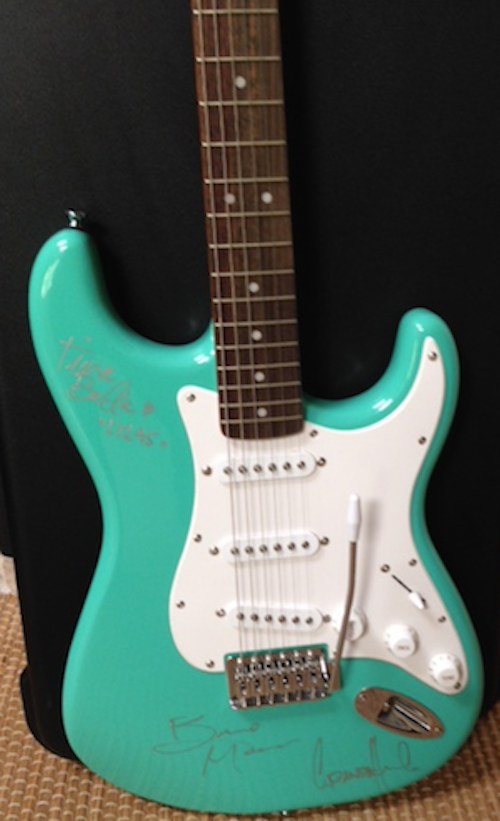 If you think all former marines and ex-L.A. police officers are conservative, you haven’t met Lou Vince, a dedicated progressive, and not just on the easy issues. “The banks that were too big to fail are even bigger now,” he told us this week. “We need to re-implement the Glass-Steagall Act so that Wall Street can’t gamble with Main Street’s money. It’s not right that Wall Street caused the Great Recession, didn’t face any penalties, and is now richer than ever. We need to send a cop to Congress to keep Wall Street in line and put handcuffs on the bankers if necessary.”

This week, Blue America is trying to help Lou raise campaign funds. Bruno Mars signed a guitar for us to give away as a thank you for one randomly-selected Lou Vince contributor. The autographed Fender Squier Bullet Stratocaster is a one-of-a-kind that Bruno, a Hawaiian Jewish Puerto Rican superstar signed specifically for this giveaway. So far he has won 2 Grammy awards and has sold over 100 million singles and albums.

Unlike the Tea Party Republican incumbent Steve Knight or the conservaDem also trying to run, Lou Vince is committed to doing something of Climate Change which he calls “one of the most pressing issues of our time. I am undoubtedly the most committed to protecting and safeguarding our environment to ensure our children and grandchildren have a sustainable future. The nation needs to follow California’s lead and seriously tackle climate change on the federal level.”

The fundraiser will end next Sunday when we select one lucky winner. It doesn’t matter how much you contribute, just that you do.

In fact, if you’re strapped for cash and can’t give, just send a post card to Blue America PAC at PO Box 27201, Los Angeles, CA 90027, and let us know that you want a chance to win the guitar too.