Eric Kingson: Why I Stand With Bernie 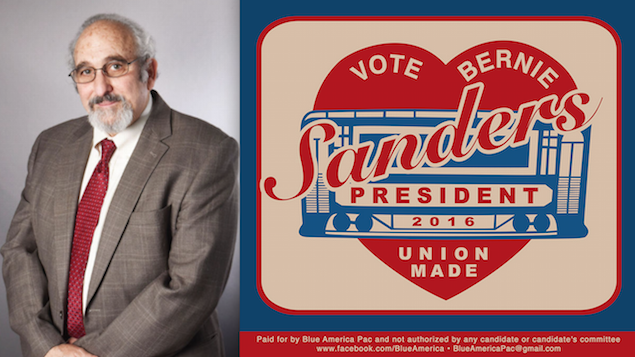 Eric Kingson, founder of SocialSecurityWorks, is running for Congress in a blue district centered on Syracuse New York. Eric has endorsed Bernie for president and his running on the same issues that Bernie is running on. If you want to contribute to Bernie’s and Eric’s campaigns, you can do so here. We asked Eric to tell us what went into his courageous decision to buck the Democratic Party Machine and back Bernie– and in Clinton’s own upstate New York backyard no less. Here’s what he told us:

When the next president of the United States takes the oath of office on January 20, 2017, he or she will be a Democrat.  By then, the nation will have had its fill of the extremist right wing of the Republican Party– especially of the disrespectful and racist messages of Donald Trump and Senator Ted Cruz. To be sure, the mean-spiritedness of the Republican Party will have torn at the nation’s fabric, but the ties that hold us together as a free and compassionate people are ultimately too strong to succumb to anti-democratic demagogues.

We Democrats, and the nation, are fortunate to have a choice between two eminently qualified people– Senator Bernie Sanders and former Secretary of State Hillary Clinton. Both have contributed greatly to our nation. Both can do the job and lead by appealing to our “better angels.” And like President Obama, they take strong stands, political and personal, against the politics, fear, divisiveness, and disregard for working families and the poor that is so evident among today’s Republican Party.

That said, I strongly and proudly support Bernie Sanders in his campaign to be our next president. Here’s why.

Bernie is igniting the interest and energies of millions of Americans, many of whom have not been previously engaged in politics. We need this at a time when our nation’s political institutions are at risk; when our economic institutions seem to work well only for the rich and powerful, not for hard-working people and families. We need new generations of Americans and older ones, too, not only to care about what is happening in our nation, but, like Bernie’s supporters, to get involved and become vehicles for a better America.

Putting aside the risks posed by Trump and Cruz to our democracy, we will still face the corporate and billionaire domination of our politics and the coordinated efforts of the Republican Party to suppress voting, especially among minority, young, and low-wage workers. Senator Sanders’ campaign is bringing attention to campaign finance. No one can doubt Bernie’s complete opposition to the domination of our politics by corporate interests and money. He refuses to accept campaign contributions from Wall Street and other corporate donors. His campaign is fueled by millions of small donations. Bernie, whose politics were shaped by involvement in the civil rights movement, is no new-comer to voting rights. He’s always been there and will work to expand the voting franchise.

Wall Street doesn’t like Bernie. And they shouldn’t because he’s the real thing.  When he talks about breaking up too big to fail banks, Wall Street and their handmaidens worry. Wall Street bankers who virtually crashed our economy don’t like the sunshine being cast on their dishonesty and undeserved huge bonuses. Too bad. The public knows that Bernie will walk the talk, and that the economic policy of a Sanders Administration will not be under the control of Wall Street shills. Another good reason to support the Senator…

Another reason for my enthusiastic support of Senator Sanders for president is that as co-founder of Social Security Works and the Strengthen Social Security Coalition, I’ve seen how effective he’s been in stopping Social Security cuts and building the case for expanding Social Security benefits. Six years ago, when we established the organization and coalition, there were only a handful of Senators and Representatives who would say “do not cut our Social Security”– Bernie Sanders, former Sen. Tom Harkin (D-IA), Rep. Keith Ellison (D-MN), Rep. Raúl Grijalva (D-AZ), Rep. Jan Schakowsky (D-IL) and a few others. It may not seem so now, but this took political courage in the first few months of 2010. The press, the talking heads, party leaders, White House advisors, and many others were caught in their own echo chamber. Nearly all believed that cuts to Social Security were needed and would soon happen.

Concerned that the fiscal crisis drumbeat would stampede Congress into cutting Social Security, Bernie organized the Senate Defend Social Security Caucus, initially bringing five other Senators along. Later, in the context of budget and deficit negotiations, when it looked like Bowles-Simpson Commission cuts would be enacted, Bernie played a pivotal role in coordinating push-back to proposed cuts to annual cost of living adjustments. In a call that six or seven of us where on, I recall Bernie saying, “Look, we can stop this cut; but we have to act fast and get the voices of  the American people into Washington,” followed by strategic suggestions for doing so. A meeting chaired by Senator Sanders in a Senate hearing room packed to the gills with 200 advocates, seniors and journalists got the message out that the American people did not want their benefits cut. Careful messaging, speeches, and one million signatures stopped the cuts– much to the credit of the Senator who has never been fearful of standing up for what he knows is right.

Today, the two remaining Democratic candidates for president are now firmly on record for expanding, not cutting, Social Security. This would not have happened without Bernie.

I am running for Congress in Central New York (NY-24). When I go to Washington as a new member of congress, I want to see a Democrat in the White House. And I believe our nation will be best served if that Democrat is Bernie Sanders.

This is a legacy defining moment for Joe Biden. He is going down as one of the biggest disappointments in labor history. https://t.co/FoPlshWbIL

Now that Florida Oathkeepers leader Kelly Meggs has been convicted of seditious conspiracy, will @January6thCmte pls pay attention to Roger Stone’s meeting w/ Meggs on 12/13/20 and his meeting with other Florida OKs (including Meggs’s wife) on 12/14/20? @dfriedman33 1/ https://t.co/s8F7qiFd69 pic.twitter.com/DfTssD8aG6