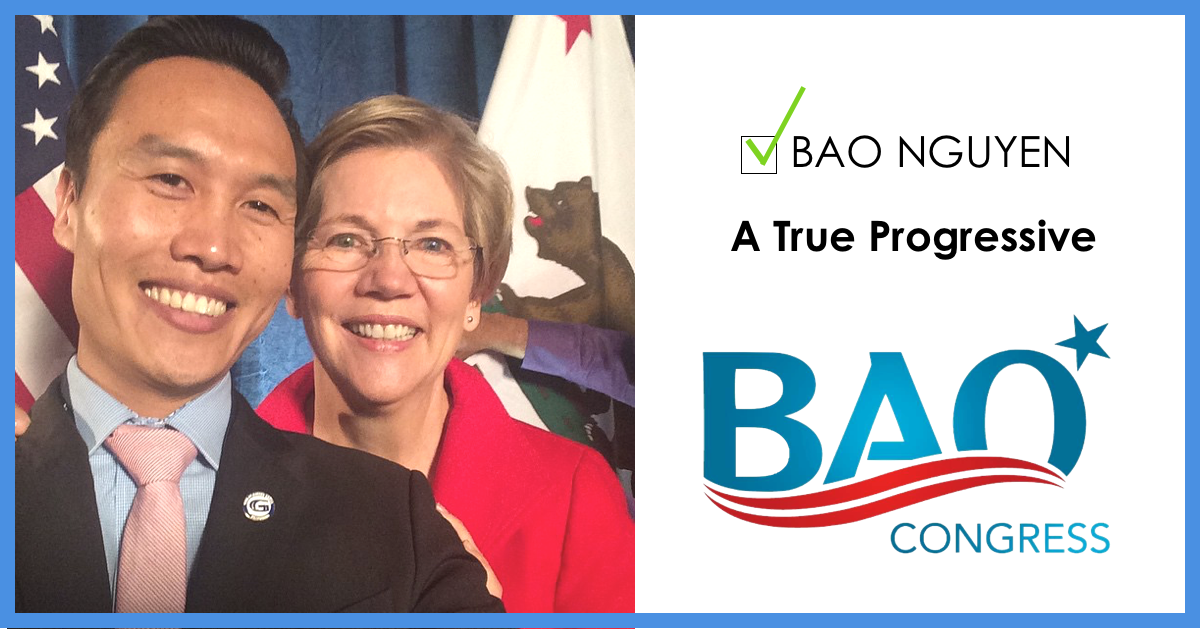 In November, voters in Orange County will choose between progressive Democrat Bao Nguyen and unsavory DINO, Lou Correa. Blue America has been behind Bao all year and we’re asking for fellow progressives to help raise the money he’ll need to get out his message and run his grassroots campaign. Here’s a message directly from Bao:

It’s been a tough and bruising primary season for progressive candidates, from the presidential race all the way down to my race for Congress here in Southern California. But I’m excited to announce that because of your support and the support of Blue America, I’ve placed in the top-two primary system, and we’ll be heading to the general election in November.

Early in the primary, local pundits had reached a consensus: our progressive campaign for Congress stood no chance against two better-known and better-funded opponents. Even on election night, when only absentee votes had been counted, but nothing from the polls and no provisional ballots had yet been processed, people in the media and elsewhere were already declaring victory for a different candidate.

But we didn’t give up. We knew there were more ballots to be counted, so we sent volunteers to the registrar to make sure every vote was counted fairly. Every day, we climbed up in the vote count and narrowed the gap. Eventually, we passed up our opponent who had supposedly already won, and we haven’t looked back.

But the fight isn’t over, and we’re facing an uphill battle against a much better funded opponent.

What the experts don’t get is that this election was never about who has the most money. It’s always been about hardworking middle and working class families. Washington is broken, and we know that sending another politician who’s in the pocket of special interests isn’t going to fix it.

We need to elect a representative who has a record of fighting corruption, not participating in it. The era of big money, special interests, and corporate lobbyists running Washington is over.

The progressive movement is just beginning. The American people aren’t bought and paid for, so why should our Congress be? Let’s vote for political courage this election. Let’s give ‘em hell.