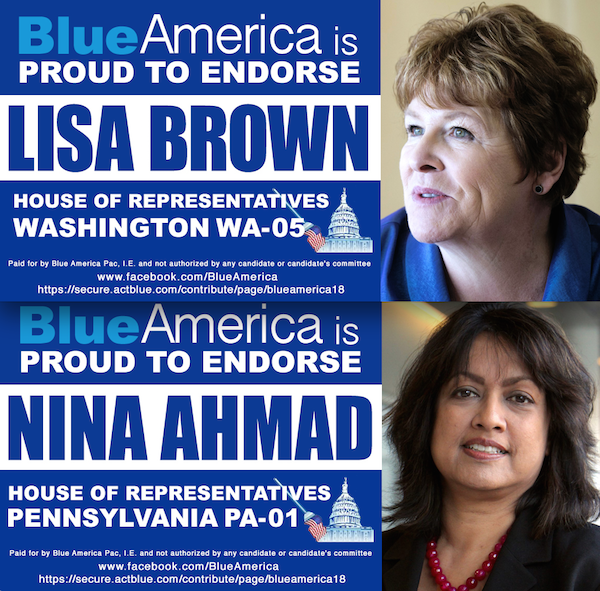 This week Blue America endorsed two inspiring candidates for Congress on opposite ends of the country. Nina Ahmad is running in Philadelphia and Lisa Brown is running for the eastern Washington seat based in Spokane. Yes, they’re both women and since 51% of the population this country are women and just 19% of the House are women, its great that two will help right that egregious disparity. But that isn’t why we decided to endorse either of them. We endorsed them because they are– by far– the best candidates running, regardless of gender.

Tomorrow McConnell has scheduled a vote in the Senate for a 20-week abortion ban that impedes a woman’s right to choose what’s best for her health, denies access to life-saving procedures, and criminalizes medical professionals. Paul Ryan has already gotten it through the House and Trump would love to make a big deal of it in an Oval Office signing ceremony.

Yesterday Nina, who is running in a Philadelphia district which Bob Brady, the city’s Party Machine Boss, thinks he owns, told her supporters that

“the only definition of modern womanhood that I believe is that each and every one of us has the right– the freedom– to choose. Whether we want to ensure dinner is on the table at 6pm or decide instead to spend our time as ‘nail-biting manophobic hell-bent feminist she devils who shriek from the tops of a thousand tall buildings’ [which is how Missouri GOP crackpot Senate candidate Courtland Sykes actually referred to women trying to make the country a better place] we must work together with Americans of all backgrounds and lifestyle choices to solve the real issues facing our nation. Pennsylvania currently has ZERO women in its federal delegation.” The Pennsylvania primary is on May 15.

Washington state holds its primary on August 7 but it already looks like the Democrat who will face off against Republican heavy-weight Cathy McMorris Rodgers is former Washington State University chancellor and former Senate majority leader Lisa Brown, an economist. She is running on a progressive platform of ideas that starts with her belief that

“true economic growth and jobs come from investing in people (through education) and in infrastructure. I championed early learning and delivered infrastructure projects to eastern Washington (working with legislators on both sides of the aisle and all corners of the state).”

Interviewing these two women gave me the personal satisfaction of feeling I was talking to people I could learn from and be rallied by. Whether it’s net neutrality, affordable college education or marijuana legalization, Lisa and Nina have already been at the forefront of the movements in their states pushing for the most progressive solutions to problems that plague working families.

Lisa has to flip a longtime red district blue, the way it used to be, and Nina has to help a deep blue district throw off the bonds of a corrupt, self-serving machine, two worthy goals for two of 2018’s very best candidates!

Please consider contributing what you can to both here.

Like I said, these are two of the best congressional candidates I’ve run across for the 2018 cycle– and we have some really fantastic candidates this year. Let’s help them make sure they replace two pretty awful, entrenched incumbents.