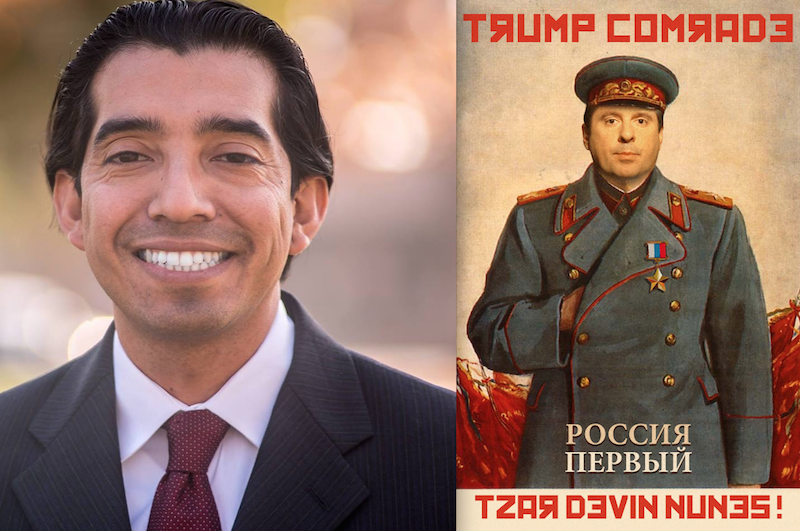 If California is the beating heart of progressive America, how can it be possible that the most powerful leader of Donald Trump’s Praetorian Guard hails from the Golden State? I’m speaking, of course, of Congressman Devin Nunes, a man so devoted to the president that he is willing to destroy any institution in the US Government that threatens his Dear Leader.

One would think that a smart Republican would keep a bit of a low profile in a state which only gave Trump 31.6 percent of the vote in 2016, the lowest percentage of any Republican nominee to ever run for president. Not Nunes. Despite the fact that Trump remains mired in scandal and embarrassingly low approval ratings, he has taken the role of Trump defender to such an extreme that his face is now the international symbol for Trumpian sycophancy.

Nunes felt the Trump magic early, traveling around the state with him on Trump Force One during the campaign and becoming an influential foreign policy member of the Trump transition. As the Chairman of the House Intelligence Committee he immediately took it upon himself to run interference for the White House by trying to help Trump make the case for his inane conspiracy theory that the Obama administration had tapped Trump Tower.

He made a fool of himself, pretending that in conducting his oversight duties he had “discovered” proof and had to rush to the White House to inform the president — only to be revealed to have conspired with Trump staffers in the middle of the night to produce this information. This supposedly led to him recusing himself from the Russia investigation although his continued involvement shows he understands that in the Trump era, rules, traditions, norms and laws are all optional for Republicans.

Needless to say, the recent drama with what’s known as “The Nunes Memo” and his announced intention to write many more in which he promises to name names in the Department of Justice, the FBI and the State Department and complete the “purge” of all government employees suspected of being insufficiently loyal to Trump, means he’s going to be very busy in Washington over the next few months.

He should be paying a little more attention to what’s happening in his district.

Nunes won comfortably in 2016 but that was before he voted for a tax bill designed to wreak revenge on California residents. It was before the Republicans decided to go to war against immigrants and start deporting people who’ve been living in the state for years. It was before Trump made fun of climate change and ignored the epic fire season that burned thousands of homes in California.It was before Nunes’ Dear Leader decided to open oil drilling off California’s coast, even as he exempted Florida a state which narrowly voted for him.

Nunes thinks his district is safe for him but everything indicates that 2018 will be a big blue wave referendum on Donald Trump. Being known as what the Fresno Bee recently called “Trump’s Stooge” may just motivate a few more Democrats than usual to come out and vote. If they do, he has a problem. The district is 45% Latino, 42% white, 7% Asian and 3% black.

Luckily, a great young progressive Latino by the name of Ricardo Franco is running to replace him and Blue America has been happy to endorse him. He’s a local businessman whose family has been in the area since 1912 and unlike Donald Trump, whose daddy had to pull strings to get him into the Wharton School of Business, Ricardo got in on his own. He has a keen insight on how to communicate progressive ideas to this traditional region in ways that feel familiar and new at the same time. And while Nunes, who is of Portuguese ancestry, says he “doesn’t mind” being called Hispanic but thinks the term is “too broad” Ricardo speaks Spanish and is proud to call himself Latino.

Devin Nunes has been in Washington for 16 years and has lost touch with his community. Today he thinks the only person he needs to please in this world is Donald Trump.

He’s going to find out this November that he is wrong.

Ricardo Franco is the future of the Democratic Party and Blue America is proud to support him. If we help him beat Trump’s most loyal henchman it would send a powerful message to both parties in Washington that progressives in this country have decided that enough is enough.

Please give what you can to help send Ricardo Franco to Washington.

Thank you for your support.