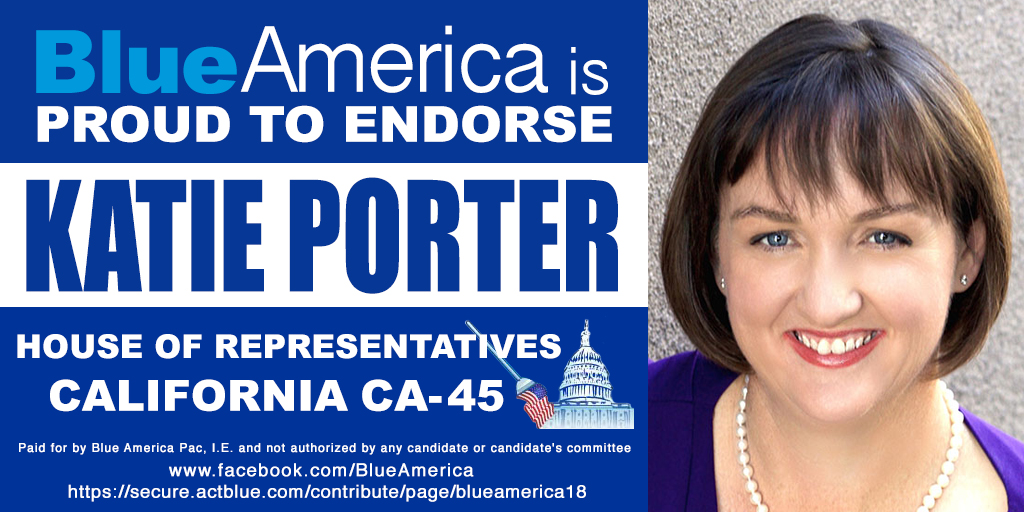 CA-45 is the heart of Orange County. It includes Irvine, Mission Viejo, Lake Forest, Rancho Santa Margarita… Villa Park and the Anaheim Hills in the north and Coto De Caza in the south. But it doesn’t include the home of Mimi Walters, the Republican congresswoman who was elected in 2014. She still lives in posh beachfront neighborhood in Dana Rohrabacher’s district and has adamantly refused to move into the district she’s supposed to be representing.

Many residents feel it’s time for Mimi to go. And this might be the year. She votes in complete lockstep with the unpopular Trump. And Trump did badly in the 45th. Romney and McCain both beat Obama in the district, but Hillary beat Trump  by over 5 points. The PVI has improved from R+7 to a much more manageable R+3.

And this year, CA-45 has an extraordinary Democratic candidate in UC Irvine law professor Katie Porter, endorsed this week by Blue America.

A former law student of Elizabeth Warren’s, they co-wrote a book about consumer protection. Warren endorsed her, as have Kamala Harris, Kirsten Gillibrand, Zephyr Teachout and progressive groups like DFA and the PCCC. She has a corporate Dem as a primary opponent backed by the DC establishment but all recent polls show Katie beating him and going on to beat Walters.

Katie hasn’t been shy about pointing out that Walters is “one of the ‘Big Money 20‘–  taking money from the NRA, Big Oil, Big Banks, and a number of powerful special interests.” She said she believes that “special interests like large financial institutions, because of Citizens United, now have the ability to spend unlimited money, giving them an outsized and unfair role in our election system.

That is why I am proud that our campaign has pledged not to take any campaign contributions from corporate PACs, big oil, big pharma, big banks, or private charter schools. We believe in running a campaign by example and have raised the resources necessary to run a competitive campaign with contributions from over 10,000 individual donors. I am going to Washington to do what I have done my whole career– to give voice to the needs of family and to fight for a fair system.”

As for policy, Katie is where you would expect candidates backed by Blue America to be. For health care, for example, she told us that she had spent her career  as a consumer protection attorney “studying how one illness or accident can lead a family to financial ruin– it shouldn’t be that way. That’s why I will fight for a Medicare for All system in which every American has quality health insurance.

And this is a defining issue in this race. My Republican opponent, Mimi Walters, helped write Trump’s health care law that gutted protections for pre-existing conditions. She was one of the first people that Donald Trump thanked at the White House after the vote. Her vote on the GOP tax plan puts health coverage for 13 million people at risk and will lead to devastating cuts to Medicare and Medicaid. And other candidates in this race have refused to support Medicare for All.”

She has also pledged to voters to take on big oil and the corporate polluters to stop offshore drilling, and that she will “fight to invest in renewable energy development, support high emission standards, and save important environmental protections. Simply put, Washington must act to fight climate change.”

Her field of expertise, consumer protection, is what attracted Blue America to her campaign to begin with. She has literally spent close to 2 decades taking on Wall Street banks and powerful financial institutions that cheat middle-class families.

“Much of my work as a consumer advocate,” she told us Friday,

“has centered around the housing crisis that rocked Orange County and many other parts of the country. Before the crisis, I was one of the first to sound the alarm about how the biggest Wall Street banks were preying on homeowners. And when the crisis hit, I was appointed by Attorney General Kamala Harris to work directly with California families who were cheated by the five biggest Wall Street banks. The five banks had promised to help homeowners who had been harmed, and it was my job to hold the banks’ feet to the fire. My team won thousands of victories against the banks, forcing them to pay billions to families. And our work helped tens of thousands of families move forward with their lives… Eight years after the crash, Orange County families still find themselves stuck. Profits again are surging for financial institutions and Wall Street, but middle-class wages are stagnant. And the cost of things that matter most for families– affording preschool, sending your kid to college, saving for retirement– are skyrocketing, while the high cost of housing in Orange County is pushing families to the brink.”

We all know what we need out of the next Congress– capable leaders who have shown the ability and willingness to stand up to Trump, the GOP and the powerful special interests. “That,” Katie told us “is exactly what I plan to do in Washington.” Please consider contributing to her campaign at the Blue America congressional page, here.