A District To Win Back In Maine 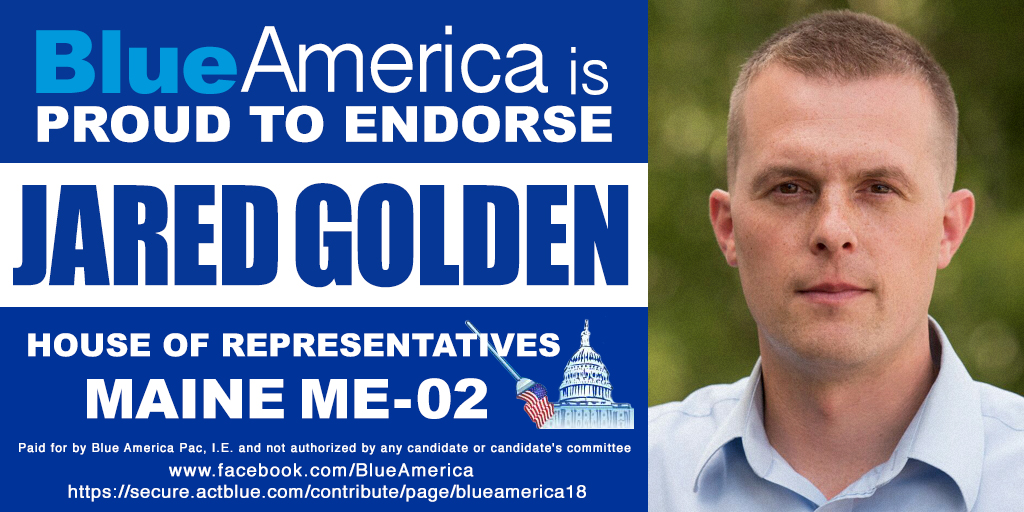 Maine’s second congressional district isn’t white collar Portland or ritzy Kennebunkport. ME-02 is an all-American blue collar district. It’s a swing district that Obama won by about 10 points both times he ran but that Hillary lost by about 10 points to Trump. The Democratic establishment was looking for a Blue Dog to run, a Republican-lite character who would sound like a less extreme version of the current congressman, Trump enabler Bruce Poliquin. Instead, Mainers chose one of their own, Jared Golden, a populist leader who doesn’t act like anything… he’s an authentic working class guy and Marine veteran. Golden has a great record of accomplishment as one of the leaders in the state House. He has a well-rounded platform, but his top issue is healthcare.

Blue America asked him to write  a guest post explaining why:

Mainers Want To Talk About Healthcare
by Jared Golden

As I travel across Maine’s 2nd Congressional District– the largest district geographically east of the Mississippi River– the one issue voters want to talk about most is healthcare. When speaking with small business owners, private building contractors, those working in Maine’s fishing industry, the best shipbuilders in the world at Bath Iron Works, and Mainers of every stripe, more often than not, the discussion turns quickly to healthcare. And it’s no wonder. For years, the hard-working people of Maine– and America– have struggled under the ever-increasing challenges associated with ensuring they and their loved ones have access to affordable, quality care.

Hearing their stories has given me both hope and determination. Hope because the folks I meet remind me of how ruggedly independent the people of Maine are; determination because these same people need a representative who has their back in Congress. Unfortunately, the current office-holder, Republican Bruce Poliquin, has turned a deaf ear to these stories. In fact, Poliquin refused to even meet with the people he is elected to represent about the issue when, last year, the Congress was debating the repeal of the ACA. Ultimately, Poliquin voted to pull the rug from under his constituents that would have left more than 100,000 without healthcare. Fortunately, this partisan effort failed due to three courageous Republican Senators but, if Poliquin had been successful, devastating consequences would have soon followed.

The American Health Care Act of 2017 passed the House of Representatives in May of 2017 with the help of my opponent. The AHCA would have made dramatic changes to Medicaid, a program, that for 50-plus years, has served the needs of the poor and disabled, including low-income seniors, and children living in low-income homes. Despite the fact that the non-partisan Congressional Budget Office (CBO) projected 23 million additional Americans would become uninsured, Poliquin still voted for this flawed legislation. And the bad news didn’t stop there.

Maine is a rural state but, in the 2nd District we take rural to another level. Mainers living far from the urban centers of the state rely heavily on rural healthcare clincs and hospitals located throughout the district. Poliquin’s vote would have devastated that network leading to a large percentage– if not all– of  these facilities closing their doors. That would have left many of his constituents without care, plus led to the elimination many good-paying jobs thus causing a double-whammy to local economies. And you don’t need to take my word for it. “We’re all worried,” Jeffrey Austin, vice president of government affairs at the Maine Hospital Association said in an article published by the Portland Press Herald. “The average operating margins in Maine hospitals are about 1 percent. There just isn’t room for dramatic negative impacts.”

The Maine Hospital Association opposed the repeal Poliquin voted for. And then there is the looming opioid crisis that Maine is facing. Poliquin’s repeal would make a terrible situation even more unbearable. In a March 2017 piece published in Perspective Magazine, doctors Peter Friedman, Christina M. Andrews and Keith Humphreys laid out the need to preserve the healthcare tools provided by the ACA in fighting the scourge of the opioid crisis– a crisis that has led to more than a death per day in my home state. The doctors wrote “Although the Affordable Care Act (ACA) was not designed with the opioid epidemic in mind, it provides valuable tools for expanding access to medication treatment.” They went on to point out “…inclusion of addiction treatment as an essential health benefit that existing insurance plans must cover, and requirements that benefits for treatment of opioid use disorder be provided at parity with coverage of medical and surgical procedures” were among the reasons the ACA should not be repealed. Despite the impact on his constituents, despite the real damage repeal would have wrought upon local communities, and despite the heartbreak of the on-going opioid crisis, my opponent still broke from the rest of our state’s Congressional delegation in voting to repeal the ACA.

I’ve served my country as a U.S. Marine; I’ve served as a staffer to a U.S. Senator; I’ve served as an elected office-holder in the Maine Legislature; and I’ve served in a leadership role in my caucus. In each and every one of those roles I was told to remember the people I was serving and, to the best of my ability, I have. If elected to the U.S. House of Representatives, I will take the lessons I’ve learned in my previous roles with me– most important among them, to remember the people I’m serving.

But I need your help.

This race has recently been moved from ‘leans Republican’ to  ‘toss-up’ by the non-partisan Cook Report. That’s encouraging– and serious. We can win this seat and return the voice of Maine’s 2nd Congressional District back to the hard-working people who call it home.

(Howie) A ‘toss up’ means that with a little extra help with campaign funds Jared has a EVEN SHOT to Flip this District from Red to BLUE. Please consider sending some “BlueWave” love to Jared Golden on our #BlueAmericaBetterHouse2018″ page.

ACTION ALERT: We need your signature to tell Trump what he can do with his private militia.

A breath of fresh air blowing through Nashville!

by the way, there is the start of a revolution unfolding in central europe, against a dictator, led in part by women and striking factory workers. #2020