Matt Brown is running for governor of the smallest state in the Union, but he’s running on the biggest package of progressive ideas and strategy of any gubernatorial candidate in America. I wish California would nominate someone like him for governor.

Blue America is thrilled, thrilled, thrilled to endorse him today and I’m proud to urge you to find out more about him and his movement and to contribute to his campaign at this link or by clicking on the Act Blue 2022 gubernatorial thermometer below.

Each has accepted tens of thousands of dollars of corporate PAC money, and none of them have put forward serious plans to decarbonize the state or promote racial and economic justice. 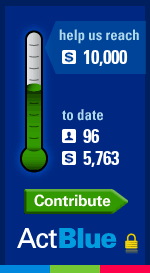 Meanwhile, Matt and his running mate– progressive state Senator Cynthia Mendes— have pledged not to accept contributions from the fossil fuel industry or donations from corporate PACs or lobbyists.

Matt is a life-long social justice organizer. Prior to co-founding the Co-op, which he’ll tell you about in his guest post down below, Matt co-founded and led Global Zero (2007-2018), an international nonprofit organization dedicated to reducing and eliminating nuclear weapons, which earned two Nobel Peace Prize nominations. As Secretary of State of Rhode Island (2003-2006), Matt removed barriers to voting, including launching Motor Voter e-Registration, a first-in-the-nation electronic voter registration system.

As you might expect the local establishment is looking to crush the movement that Matt has been building, so he sure could use some help in getting his message out. If you can, please consider giving a #Solidarity2022 gift to his campaign today.

The right’s power is devastating– they’ve successfully created a political project that has slashed voting rights, destroyed the social safety net, and accelerated the climate crisis. With the failure of the Build Back Better agenda and prospects looking precarious for Democrats in the upcoming midterms, it can feel like there’s no answer to right-wing power. But it’s important to remember where the right’s political project began: in the states. In order to stop our slide into right-wing control, the left needs to start building power in state governments across the U.S. Here in Rhode Island we’ve found a breakthrough model to do just that.

This entire group of candidates is extraordinary. They’re teachers, waitresses, retail workers, and nurses – all people who care deeply about their communities. Each of these candidates are being recruited, trained, and supported by the RI Political Cooperative, an organization dedicated to ensuring progressives have the resources and support necessary to defeat establishment-backed candidates. Check out our launch video to get a feel for the movement we’re building:

The Co-op is a new organization, but it has already had a great deal of success. In 2019, I co-founded the organization alongside two incredible leaders, Jennifer Rourke and State Senator Jeanine Calkin. In its first election cycle in 2020, the Co-op won 10 races against powerful conservative incumbents, transforming politics in Rhode Island.

Now, Cynthia, the Co-op candidates, and I are fighting to win a full governing majority, replacing the corrupt, conservative state government and winning control of both legislative chambers and the executive branch. When elected to office in 2022, we’ll enact sweeping climate legislation to put Rhode Island on track to become the first state to achieve net-zero emissions. We’ll also pass universal healthcare, fund large scale investments in green affordable housing, and implement a wide-ranging series of racial justice policies which include ending mass incarceration and shutting down polluting industries in Black and Brown communities across the state.

We are building a replicable model to enable the progressive movement to win governing majorities in statehouses nationwide and defeat the right-wing politicians who have captured state governments across the country over the last half century. With Democrats’ fragile majority at the federal level and right-wing power on the rise, now is the time to invest in a model for winning back state-level grassroots power. I hope you’ll join us.