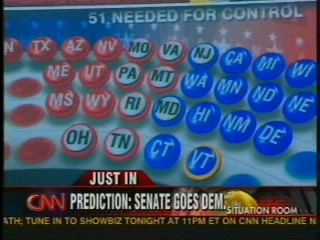 This is huge. Stuart Rothenberg already predicted a Democratic House (34-40 seat gain) but now he's predicting the Senate will go blue too.

From the Political Wire :

The latest Rothenberg Political Report ratings are out. Here are exclusive excerpts provided to Political Wire:

The Senate: "While Senate control is in doubt, with Democrats most likely to win from 5 to 7 seats, we do not think the two sides have an equal chance of winning a majority in the Senate. Instead, we believe that state and national dynamics favor Democrats netting six seats and winning control of the United States Senate."

The House: "Going into the final days before the 2006 midterm elections, we believe the most likely outcome in the House of Representatives is a Democratic gain of 34 to 40 seats, with slightly larger gains not impossible. This would put Democrats at between 237 and 243 seats, if not a handful more, giving them a majority in the next House that is slightly larger than the one the Republicans currently hold. If these numbers are generally correct, we would expect a period of GOP finger-pointing and self-flagellation after the elections, followed by a considerable number of Republican House retirements over the next two years."

Governors: "With Republican seats like Idaho, Alaska, and Nevada in play for state-specific reasons, and Minnesota vulnerable to a Democratic wave, the ceiling for possible Democratic gains is high. We have narrowed our earlier projection from Democratic gains of 6-10 to 7-9."