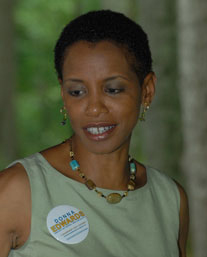 This afternoon, 2pm EST, Donna Edwards will make her Blue America live debut. She’s the best of the best– a brilliant, energetic, compassionate and creative woman running against a reactionary hack, Al Wynn, with no values other than self-entitlement and self-enrichment. Their primary in Maryland’s 4th congressional district is in February, a full 9 months before the general election when we pick a replacement for Bush and Cheney. Wynn has been as rubber stamp a Democrat as the Bush Regime could hope for, especially when lobbyists were handing out the contributions to make the cooperation go down easier. He’s the DLC candidate and DLC Chairman Harold Ford has already been campaigning for him. Go over to FDL and say hi to Donna. And think about giving $5 or $10 to her campaign kitty on our Blue America ActBlue page. It’s worth it to make the country a better place.