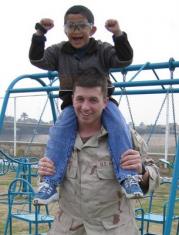 This afternoon he’ll be taking questions from all comers over at Firedoglake at 2pm, EST. And people who chip in to his campaign get a chance to win the book he’s featured in, WHAT WAS ASKED OF US– AN ORAL HISTORY OF THE IRAQ WAR BY THE SOLDIERS WHO FOUGHT IT.

I’ve got a preview up at Down With Tyranny, for anyone who wants to get a leg up on the questions and find out why Jonathan would be a great addition to the U.S. House of Representatives. If you won’t be around for the FDL chat but want to show Jon some Blue America love, our ActBlue page is open.

@CalNurses brought together an army of almost 600 activists tonight to prepare our battle plan to pass #CalCare #AB1400 in the next week!