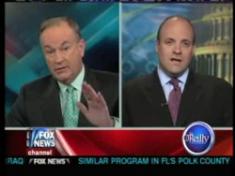 Never one to let go of a bone, Billo continues his ridiculous gnawing on DailyKos, and its offshoot convention, YearlyKos. O’Reilly’s “memo” for the night counsels all the Democratic presidential candidates against attending YearlyKos, lest they be tainted by association of a site that “traffics in hate.” Hillary Clinton’s Communication Director Howard Wolfson does a yeoman’s job of trying to pierce through Bill’s insanity and attempt to inject a little rationality in the subject, but you know Bill is not going to let Howard have the last word.

WOLFSON: “The days where you can dictate where Senator Clinton and other Democrats go, who we talk to, are over.”

Did we have those days to begin with?

UPDATE: Cenk of The Young Turks thinks that it’s time to label Fox News what it actually is: Fox Opinion…and he has a poll up in which he invites you all to participate:

Should institutions like Yearly Kos, the Democratic National Convention, and Democratic presidential campaigns give Fox “opinion media” credentials instead of the classic media credentials?

Go vote and let’s get honest about what Fox really is.