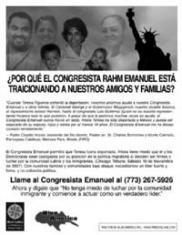 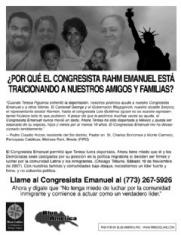 (The Accountability Moment) Updated: Here’s some pics from ICIRR folks that have joined Blue America. And here is an audio report from Chicago Public radio on Joshua Hoyt‘s reaction…Many of you have probably heard that Rahm is backing the extreme right wing Tom Tancredo and his hateful stance on immigration. C&Lers have made their voices heard loud and clear on this issue and understand the need for good border security, but with a comprehensive—humane plan in mind. We’re human beings after all. The Republicans need a wedge issue to run on like they did in the ’04 election with “gay marriage” and now they’ve picked–Immigration. Because as you know they’re stealing all our jobs, plan to blow up our malls and will be illegally voting…<snark> I’ve been following the Voter ID bills (Indiana is coming up and Kevin Drum has some important graphs) and immigration will be the major reason the Republicans give to try and scrub the voter rolls to steal as many elections as they can. Have they produced any illegals that have actually voted? It’s all a straw man story, but you know that already.

After the blowback from the base around comprehensive immigration reform (and the loss of any hope of splitting the powerful growing Latino voting bloc) they are going back to the tried and true. Vote suppression and bogus accusation of voter fraud. They’ve been doing it for years and now that they’ve had access to the DOJ and trained a whole new generation of Monica Goodlings, I have no doubt they’ve devised some great new techniques.

Rahm’s play feeds into the Voter ID/fraud meme and it is truly disheartening to see so we at Blue America have decided to send Emanuel a message.

Blue America PAC supports Chicago immigrant grassroots in Cong. Emanuel’s home district, in a fight for the soul of the Democratic Party on immigration issue

Chicago November 15, 2007 — The Blue America PAC is joining today with ICIRR (Illinois Coalition for Immigrant and Refugee Rights) and Chicago grassroots immigrant groups to demand accountability from Congressman Rahm Emanuel. The PAC is funding ads and robocalls calling on Emanuel to:

“Stop being afraid to fight for immigrants, and start acting like a real leader.”

So why in the world do Democrats believe that they’ll benefit from a new enforcement only bill so harsh that it even calls for legal family members who help an undocumented worker to get a year in jail for doing it? This isn’t like welfare reform at all. There’s no “taking it off the table.” This is an issue that hits directly at the largest and fastest growing new voting bloc in America.

The report documents how Hispanics have gone from a group trending Republican to a group overwhelmingly Democratic; one whose percentage of the American electorate has increased by 33 percent in the last 4 years; and one poised, because of the structure of the Electoral College, to determine who the next President will be in 2008.

Telling these people to suck it up, as Carville and Greenberg, in their ever more desperate quest to recover the aging “Reagan Democrat” are doing by urging Democrats to pass legislation virtually designed to suppress their vote, is nothing short of political malpractice. It is the equivalent of the Republicans telling the Christian right to stay the hell out of politics back in the 1980’s….please read on