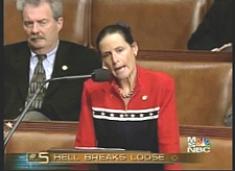 Well, duh. But this time, it’s one of her fellow Republicans talking her down.

Every now and then we like to check in on the latest antics surrounding GOP Rep. Jean Schmidt — the Ohio Republican who called Jack Murtha a coward on the House floor. And boy oh boy, her latest doesn’t disappoint.

Schmidt is now enmeshed in a bitter feud with another Ohio Republican, who’s so furious with her that he called her a “lying b—-” and a “despicable person” who would “sell her mother” — and expressly told us we could print that!

“You can quote me anywhere you like. Jean Schmidt is a lying b—-,” said Brinkman, who lost his primary challenge to her this year by a 58%-40% margin, in an interview with Election Central. “She would sell her mother to promote herself. She is a despicable person. She will go any length possible to win, to get what she wants.”

Schmidt is running against Blue America’s Victoria Wulsin. Please help if you can in her campaign against the ethically-challenged Mean Jean.