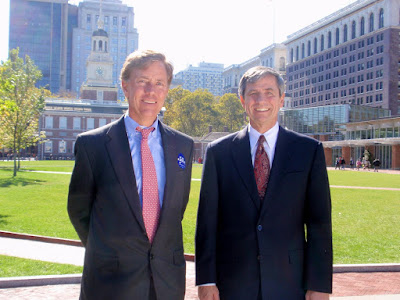 Yesterday Arlen Specter was back at his old media home, Fox News, singing a new tune, dancing the Lieberman shuffle, calling the GOP “a party of obstructionism.” Well, he’s got that right; they are. And until consistent polling showed that a right-wing extremist, Club For Growth head Pat Toomey, would kick his ass from Chester to Erie and from Waynesville to Carbondale in the Republican primary, Specter was very much a part of that obstructionist machine. Staring into the eyes of political mortality, Specter cut a deal with the White House to jump the fence and “become” a Democrat. He made the purely opportunistic switch on April 28. And here he was two weeks later on Meet The Press letting Pennsylvania voters know exactly what kind of a “Democrat” he would be:

Today he was calling his old colleagues obstructionists on the exact same issue for doing precisely what he was doing, although he has also bragged about how he will also vote with Republicans against Employees Free Choice. (The only difference is that he takes even more in thinly-veiled bribes from the Medical-Industrial Complex–$4,266,393, the most of any member of Congress who didn’t run for president– and Big Insurance–$1,058,655– than most of them do.) Oh… and there’s one more difference: Admiral Joe Sestak. Joe Sestak’s constant pressure on behalf of working families has pushed Specter away from his unswerving support for his corporate donors. Petrified of being defeated in the Democratic primary, Specter sounds like he’s almost a Democrat.

It was in the spring of 2006 that Blue America first started following Admiral Sestak as he sought, successfully, to dislodge another corrupt Republican barnacle obstructing progress in Washington, Curt Weldon. He was one of the first candidates our PAC ever endorsed and we have been immensely impressed by something that has distinguished Rep. Sestak from almost all the other members of Congress we’ve worked with. He is a critical thinker who seems to relish a debate of ideas. We don’t always agree on every single issue but he never gets all brittle and uptight when challenged and he is always eager for input and eager to go through the thought processes that led him to make a decision. If there’s one thing I’ve learned since starting Blue America, it’s that no one is buying a member of Congress with an endorsement and no member of Congress will agree with you on every single vote. (Barney Frank once famously said even you wouldn’t agree with you on every single vote.) What we do look for is someone with a sterling character who is open-minded, courageous and with inherently progressive sympathies. That’s why we’ve continued to support Joe Sestak and why we asked him to come over to Crooks and Liars today for a live chat. He’ll be joining us this afternoon at 3pm (PT), 6pm back in Pennsylvania. And he’s bringing along another ole Blue America friend, Ned Lamont.

When I spoke to Rep. Sestak on the phone last week about the health-care debate, he was very forceful. “I’m going to have a very difficult time if I’m asked to vote for a bill that doesn’t have a public option,” he began. “I support a public option so that individuals are no longer stuck in insurance markets with no choices and no competition to bring down costs… I want to end unfair rationing by insurance company executives, like the small business owner who came into my District office because to complain about not being able to purchase insurance for herself or her employees because she had ovarian cancer ten years ago… As vice-chairman of the small business committee, I understand the need to reduce health care costs for small businesses. Only 62% of all small firms (less than 200 employees) offer health insurance, as compared to 99% of large firms. When they do offer insurance, it costs roughly 18% more than for larger employers.”

You can find the rest of Specter’s real health care record at DownWithTyranny. Meanwhile, please join us in the comments section below for our chat with Joe Sestak and Ned Lamont. After you’ve heard them out, if you’d like to sign up as a volunteer or donate to Rep. Sestak’s election fund, you can do it on his website.