I’ve been noticing a disturbing trend in the Kentucky contest for the Senate seat that McConnell forced Jim Bunning to give up. Whenever you line up the candidates on the issues, you find 3 nearly lockstep conservatives against one progressive. The lockstep conservatives are McConnell’s Republican Machine handpicked candidate, his boy Trey Grayson; the John Birch Society/teabagger candidate, Rand Paul; and a worse-than-Blanche DINO, Dan Mongiardo who thinks the way to the Democratic nomination is to agree with the Republicans… on everything. And then there’s Kentucky’s principled Attorney General, Jack Conway, who’s made a name for himself standing up for ordinary Kentucky families against the special interests which tend to dominate Kentucky politics. Take a look at this simple grid comparing how the four candidates stand on some of the issues. 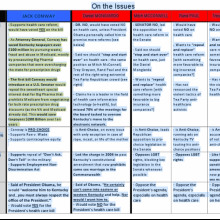 The other day I got Jack on the phone and asked him to come by Crooks and Liars today to talk with the Blue America community about his primary race and his probable November run against Rand Paul. He’ll join us this afternoon at 5pm (ET/2pm PT) in the comments section below. Yesterday we posted a thumbnail rundown on the race here. Tomorrow Rand Paul and a mob of anger-stoked teabaggers have announced their intention to march on Jack’s office to demand that he join the right-wing Attorneys General trying to overturn healthcare reform, just as conservative Republicans went crying to the courts to try to kill Social Security when progressives passed that. Problem for little Rand and his band of kooks is that Jack not only supported the healthcare legislation, he’s already thinking of ways to perfect the bill and is one of the first Senate candidates I’ve spoken with who is excited about the Alan– not Trey– Grayson approach to cost controls by offering a Medicare-for-all solution to any American citizen who chooses to buy in.

He turned the frivolous law suit-crazed anti-healthcare fanatics down flat, saying that what they’re asking for is “a Republican Party gimmick” that “makes for good Tea Party politics but is based on questionable legal principles.” Unfortunately, his anti-Choice/anti-gay Democratic opponent, Mongiardo, is on the same page as the Republicans! He seems to be getting his campaign slogans from the same place as Trey Grayson, straight from Mitch McConnell’s office. They’re all talking about trashing the healthcare bill and “starting over,” a pure GOP talking point.

Let’s repair to the comments section, below, and meet Jack Conway, a man we’re hoping will be one of several red to blue pickups in the Senate this November, and not just red to blue, but, far more important, reactionary to progressive.