Would You Like To Help Retire Hatemonger Virginia Foxx? by Howie Klein, crossposted at DWT 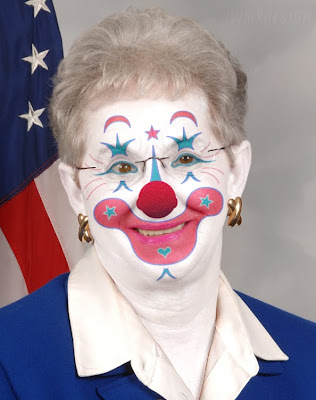 It’s very nice that Illinois Republican Rep. Aaron Schock works out in a gym and wears lavender blouses and chartreuse belts, and it’s a step forward– I think– that California Republican Rep. David Dreier no longer even bothers to pretend and is basically “out” Inside the Beltway, having discarded the closet everywhere except in the suburban L.A. district he rarely even visits and has no real connection to. Both of these gay closet cases, however, along with a dozen others, vote against gay equality time and time again– from opposing protecting the LGBT community from hate crimes to opposing ending Don’t Ask Don’t Tell and ENDA.

As recently outed homophobic state Senator Roy Ashburn (R-CA) explained when asked why he voted against all issues regarding equality for gay people, Republican closet queens live in terror of being outed. “I was hiding,” he told California journalist Patt Morrison. “I was so in terror, I could not allow any attention to come my way. So any measure that had to do with the subject of sexual orientation was an automatic ‘no’ vote. I was paralyzed by this fear, and so I voted without even looking at the content. The purpose of government is to protect the rights of people under the law, regardless of our skin color, national origin, our height, our weight, our sexual orientation. This is a nation predicated on the belief that there is no discrimination on those characteristics, and so my vote denied people equal treatment, and I’m truly sorry for that.”
One day Dreier and Schock will give similar interviews. Virginia Foxx never will.

As far as I know, Virginia Foxx isn’t gay. Her anti-gay voting record– the most virulently anti-gay voting record in Congress– is fueled by pure, unmitigated hatred. Dreier, Schock and all the GOP closet cases voted against the hate crimes bill named for Matthew Shepard, but only Virginia Foxx managed to take to the House floor and spit on Shepard’s memory while his mother sat in the visitor’s gallery:

Foxx is a sick cookie no matter how you look at it. Her bigotry and hatred know no bounds. Aside from her jihad against the LGBT community, she has consistently voted against ordinary working families, and bears a particular animus against public education. She was one of only 13 Members of Congress this year to vote against a bipartisan resolution to support the goals and ideals of the National School Lunch Program, against recognizing that our pupils deserve access to high-quality, safe and nutritious meals in school. 155 Republicans, including the entire leadership, voted for it. Foxx and a dozen radical right antisocial nihilists were the only NO votes.

Today Blue America began running television spots in Foxx’s northwestern North Carolina district. She was chosen for this distinction in an open vote of Blue America contributors. And she won by a landslide. Here’s the ad we made, which started running today:

I hope you like it. I hope you like it enough to keep it running in Forsyth County and help us spread it west through Yadkin, Wilkes and Iredell counties all the way to Watauga and Ashe. Replacing a reactionary, narrow-minded hater and bigot like Foxx with an enlightened man of the people like Billy Kennedy would be a giant step, not just for North Carolina but for the whole country. The cost is fairly reasonable to run these ads in the Winston-Salem suburbs– the most expensive ad market in the district– and that’s what we’re doing right now. Let me give you an idea about some of the prime time spots we’ve bought so far and what we’ve paid:

Can you help us keep the ad running? One of the things that makes Blue America different from other PACs is that every cent donated goes on the air. There are no commissions and no rake-offs. Everyone is a volunteer, and no one charges any expenses to the contributions. The ads were made by people who believe in Billy Kennedy and are outraged by Virginia Foxx’s politics of divisiveness.

If you donate $25.50, that means another airing of the ad on Rachel’s or Keith’s show. And we’d like to expand the buy, in terms of time, geography and… we’d even like to put it on Fox (don’t worry, we don’t advertise on Glenn Beck’s hate talk show), HGTV and the Weather Channel! Please consider donating here. You can also send a check made out to Blue America PAC to PO Box 27201, Los Angeles, CA 90027.
Share Retweet