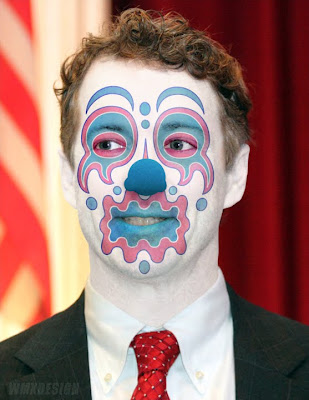 I was on the phone with a Kentucky-based AP reporter the other day– at least I think he was based in Kentucky– clearing up some false claims about Blue America’s very public support for Kentucky Attorney General Jack Conway after some insane press release from Karl Rove’s shady political action committee, American Crossroads, sent out some false information about us. That done, I decided to take a look at what American Crossroads is up to in Kentucky. The first thing I found was sickening– a couple of September 22 expenditures against Jack– $13,805 for media production work and $235,246 for ad placement. That’s on top of Independent Expenditures the week before from the NRSC ($414,007.00 + $12,000.00 + $70,171.00), as well as a flood of smaller expenditures from the insidious Club For Growth, DeMint’s Senate Conservatives Fund and from the anti-Choice fanatics, National Right to Life. In all, these Republican Party front groups have already spent $745,229.00 smearing Jack on TV and radio from one end of Kentucky to the other.

Not many outside groups have spent anything in Kentucky in favor of Jack’s campaign– nothing from Menendez’s all-failure-all-the-time DSCC, which is probably trying to figure out a way to insert Cal Cunningham into the race– and the only I.E. I could find was $43,941.00 spent by MoveOn in opposition to Rand Paul.

Nonetheless, yesterday’s Louisville Courier-Journal bannered the brand new SUSA Bluegrass Poll showing that Conway has made up whatever deficit he’s had in the minds of Kentucky voters. “Democrat Jack Conway,” they reported, “has cut sharply into Republican Rand Paul’s once-commanding lead in Kentucky’s U.S. Senate race, moving into a statistical tie with a little more than five weeks before Election Day… The previous Bluegrass poll, released the first week of September, showed Paul leading Conway 55 percent to 40 percent.”

The poll shows that Conway, the state’s attorney general, is now appealing to voters who say they are neutral on the tea party– Paul’s base of support.

And Conway is building a significant lead among women, who earlier were almost evenly split between the two candidates.

The widening of a gender gap goes a lot further than women being turned off by Rand Paul’s bizarre wig. Women are often primarily motivated by concerns for their families and, especially, their children. Paul’s crackpot pronouncements about how the government has no role in protecting society from the Eastern Kentucky drug epidemic that no one has told him about and about how Kentucky doesn’t want federal financial help, have caused many women, particularly independents to do a double-take on the Tea Party-oriented ideologue. For every tax dollar Kentuckians send to the federal government, they get back $1.51, a great deal– subsidized entirely by states like New Jersey, California, Illinois, New York, Massachusetts, Washington, Connecticut and the other states that pay far more than they get back. “Paul is in effect saying that if he is Kentucky’s next Senator, he will work to reduce his state’s share of federal spending, thus hurting his own constituents.” He sounds almost as crazy as… Joe Miller, the Alaska fringe kook who doesn’t recognize the great deal Alaskans get ($1.84 for ever dollar) and, like Paul, promises to be an advocate for making his own constituents’ lives much poorer.

And if that weren’t bad enough, Rand Paul, who abhors campaigning among the “common people,” is advocating policies that instead send American jobs– and wealth– overseas. The tax code has a loophole that lets companies deduct their foreign interest and income from their U.S. taxes. This provision essentially encourages companies to invest in foreign companies and ship jobs overseas. Experts estimate shutting this loophole would save $100 billion over ten years. And it would be more effective if combined with an effort to shut down offshore tax shelters, which the Congressional Budget Office estimates could save an additional $30 billion. Conway vigorously supports closing this loophole. Falling inline behind the Party of Big Business, Rand Paul just as vigorously opposes it.

If it sounded above that I was insinuating only women cared about their families and their children and about Paul’s bizarre claims about the drug problem (or lack of it), that’s not what I meant. In fact, this powerful Conway ad is aimed directly at fathers. Please tale a look at it and consider helping him keep it on the air by contributing to his campaign.