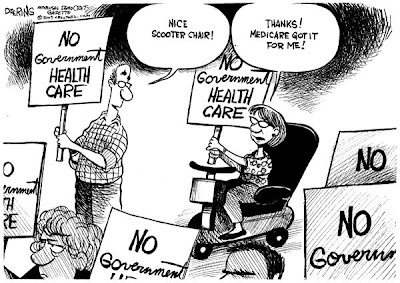 Our radio ads in NJ-7 and FL-24, exposing the gross hypocrisy of Leonard Lance and Sandy Adams– each of whom tried to deceive their constituents by claiming to not be taking government-subsidized healthcare while getting it from their respective state’s programs– have stopped running… at least for now. We have some more plans for these two liars.

As Jim Rosen pointed out for the McClatchy newspapers a few days ago, Norman Ornstein, an analyst with the conservative American Enterprise Institute, notes a significant gap between the talk and the walk of lawmakers who oppose “the federal takeover of health care” while accepting taxpayer funded medical benefits for themselves and their families. Ornstein points out that “The amount of hypocrisy here is obviously very high for people who talk about how we all have to make sacrifices, but don’t make any sacrifices themselves. They talk about how the health care system is out of control, but then they take these very generous benefits they get as members of Congress.” 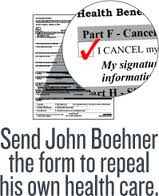 One or two of the Republicans– but literally only one or two– actually sound almost like progressive Democrats when they refuse the healthcare package. Florida freshman Richard Nugent, in turning down the federal medical benefits to which he was entitled, seemed to indict the vast majority of the other GOP freshmen as hypocrites. “When you have Americans that are struggling, why should I get a cost savings because I’ve just got elected to the United States House of Representatives?” Sounds great, right? Except… does the former sheriff get taxpayer-funded healthcare through his old job, the way Lance does?

Yet the state’s four freshman representatives aren’t repealing their own new memberships in the Federal Employees Health Benefit Program, a heavily taxpayer-subsidized plan with broad choices, generous provisions and low premiums thanks to discounted rates for its 8 million policyholders nationwide [72% of whose costs are paid by taxpayers].

…Rep. Trey Gowdy, a Spartanburg Republican who defeated incumbent Rep. Bob Inglis last year in the Upstate’s GOP primary, said he now has the same health coverage he had from 1994 to 2000 when he was a federal prosecutor in the U.S. Attorney’s Office in Greenville.

Gowdy said he chose to go on the federal health plan instead of using state government coverage provided to his wife and their two children through her job as a Spartanburg public schools teacher’s aide.

“It may have scored political points for me to tell everyone I turned down my federal health insurance, but it seems disingenuous and would have added to the South Carolina rolls someone who has employment elsewhere,” he said.

However solid it may be, that kind of reasoning could extract a political price.

Only one-third of Americans believe that new House members who campaigned against Obama’s health insurance law should accept their federal medical coverage, according to a survey in November by Public Policy Polling, a Democratic-affiliated firm in Raleigh, N.C.

Fifty-two percent of Americans think the GOP freshmen lawmakers should reject the federal benefits, while 15 percent have no opinion.

Republican and independent voters had even stronger feelings, with 58 percent of them saying their party’s new House members should turn down the medical coverage.

We’re trying to raise the funds to put our ad on more New Jersey radio stations. If you haven’t heard it or would like to donate to that effort, you can do both here. And if you’d like to read a guest post from Ed Potosnak, the progressive Democrat who ran against Lance in 2010 and plans on doing the same in 2012, here’s a link.

If they want to investigate then investigate how Texas is treating migrants seeking #LegalMigration. They can't keep shredding human dignity by putting them on buses to different states to prove a point. #FreshResists

To understand MAGAs and the Republican Party, you must pay attention to how they vote in Congress, NOT what they say on Rupert Murdoch’s propoganda channel, Fox News. Republicans are AGAINST child tax credits, affordable child care, and universal Pre-K. GOP simply doesn't care. pic.twitter.com/Hc0C8tKgv6