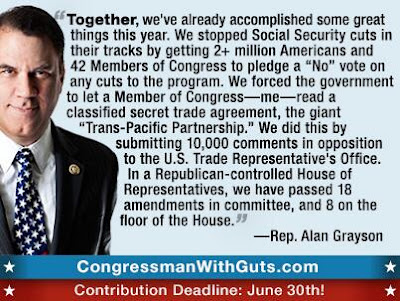 Today’s the end of the FEC fundraising quarter and I want to refer you to a post yesterday you may have missed about real bipartisanship, bipartisanship based on compromising that genuinely works for both sides, not compromise based on a combination of opportunism, bribery and one side betraying core values.


Some Members of Congress– virtually all the Republicans, all the New Dems and every single Blue Dog for example– finance their political careers by taking legalistic bribes from special interests like Wall Street banks, armaments makers and/or Big Oil. Blue America has been encouraging a new model, one based on congressmen and senators who represent actual citizens and citizens who in turn chip in to help with those Members’ campaigns. Our primary avatars for this model has always been Alan Grayson in the House and Bernie Sanders in the Senate.


Like I said, this weekend is another quarterly FEC deadline. You probably got dozens of e-mails from all kinds of phony-baloney Democrats begging for help, primarily ones like Patrick Murphy, Sean Patrick Maloney and Ann Kuster who have worked for the bad guys all year and have only earned your scorn. Instead we’d like to ask you to consider making a contribution to Alan Grayson’s campaign. He continues to super-serve ordinary working families, not big, wealthy corporations and their lobbyists.


This week he offered an amendment to an offshore drilling bill that would have guaranteed each state the right to make the ultimate decision about drilling. He put together a coalition of environmentally concerned Democrats and states rights-oriented Republicans, including some of the most right-wing Members of Congress. Big Oil panicked and put pressure of the GOP House leadership to get some of the Republicans to change their votes. Some did– but not enough. But Big Oil had an ace in the hole: Blue Dog John Barrow (GA), the House Democrat they gave the most money to last year. He and fellow Blue Dog Jim Matheson (UT) were the only Democrats to vote against Grayson’s amendment Friday. The amendment lost by one vote… by one vote in a House where Republicans have a 33 vote margin. No Democrat has been able to do anything like that… except Alan Grayson.


Big Oil, Big Finance, the Military Industrial Establishment have every Republican and a good solid chunk of Democrats. We have Alan Grayson. Let’s make sure we keep him in Congress. The other names on that page have been vetted with Grayson in mind. We want to find him a team who will be there fighting for the same values and principles, instead of more like John Barrow and Jim Matheson.

To whom does Haliburton give money?


Here’s how Congress works for most of the Members: they sit in their offices, they cross the street to the Floor of the House to vote every once in a while, and, while in their offices, corporate lobbyist after corporate lobbyist comes to kiss their rings. They kiss that ring with their lips, and, with their hands, they hand over the language that they want inserted into a bill that will help their cause.


Then, after the Members of Congress do the bidding of their corporate masters, they walk across the street to the party HQ, pick up the phone, and ask those same corporations to raise tens of thousands of dollars for their campaigns.


These corporations aren’t bankrolling my campaign, because I don’t do their bidding. I rely on you. If you want me to keep fighting and keep legislating in the public interest, I need your support before the important June 30th deadline.

Even $5 and $10 contributions, if enough people make them, can determine a race. You can help Alan here.

We ran this amazing video of Grayson already but I want to run it again… it’s that good:

And here’s another clip that should blow minds– especially inside the DC Democratic Establishment. “We need more Democrats who are Democrats… As Howard Dean said years and years ago, ‘You can’t beat a Republican by being a Republican.’ Nobody’s fooled by that. If the public has a choice between a real Republican and a fake Republican running as a Democrat, they’ll choose the real Republican every time. So it’s actually self-defeating.” He just devastated Steve Israel’s entire DCCC strategy: