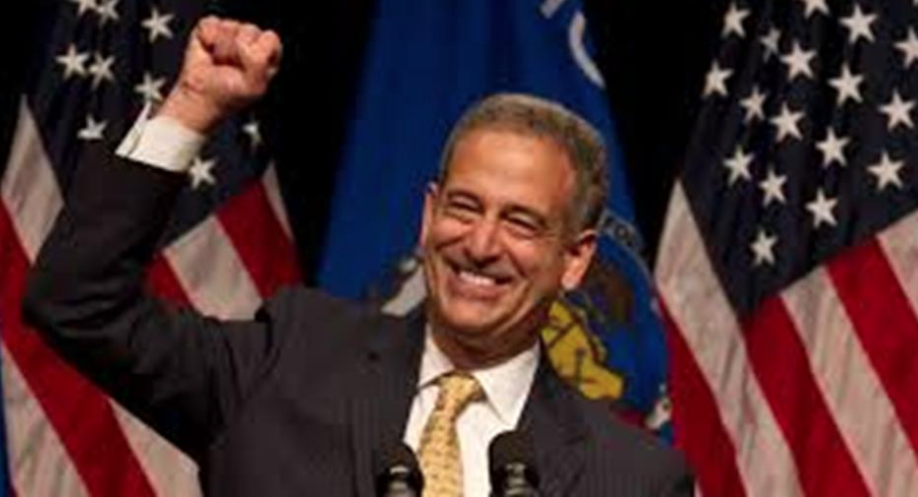 If there was one race that indicated that the 2010 midterm GOP sweep was a sign of the end times, it was the fact that Wisconsin Senator Russ Feingold had been unseated by a Tea Partying cretin by the name of Ron Johnson. The plastics manufacturer bought himself the seat with nearly 9 million dollars of his own fortune and many millions in outside PAC money. One would have thought that a grown man building a statue of Ayn Rand and running on the “Atlas Shrugged” platform would have put them off, but like all the winning Tea Partyers that year, his dishonest claim that Feingold’s vote for Obamacare would result in everyone over 65 being thrown into Lake Michigan (or something just as bad) meant that he got a shot.

Five years later the state is drowning in regret, with Johnson mired in less than 40% approval , his constituents embarrassed and ashamed.

And they want Russ Feingold back! He is leading Johnson in every poll that’s been done this year, the most recent a PPP Poll that puts him up 9 points. He’s up 14 points among Independents and even manages to get Republicans in the double digits. Let’s just say that Wisconsin knows they made a mistake.

Luckily, Feingold is rested and ready to take his seat back. He announced this week and Blue America is enthusiastically endorsing him as we have in every race he’s been in since we first started. Nothing would be more thrilling to us than to see both Wisconsin progressive stalwarts, Russ Feingold and Tammy Baldwin, in the US Senate together.

If you’re wondering if Feingold has trimmed his sails in the last five years, wonder no more. The first thing he did after he announced was come out swinging without hesitation against the Trans Pacific partnership trade deal:

“The economy has definitely been improving, and things like the stock market are doing better. But the economy has to be good for working-class and middle-class families who work every day, send their kids to a school like is in front of my house, and they have to be able to enjoy their lives. That’s why you don’t pass a trade agreement that ships even more jobs overseas.”

In case you still think he might not be the kind of Senator who will join that growing bloc of progressives in the Senate, perhaps this endorsement will put your mind at ease:

Elizabeth Warren said “Just the idea of having Russ by my side in the Senate makes me happy. But I don’t kid myself: We’ve got a really, really big fight in front of us for that to happen.”

She’s asking her supporters to get behind Feingold early to help him offset the gusher of cash the right wing money boyz are preparing to throw at Ron Johnson.

We’re asking you to help too.

Russ Feingold was a great Senator and we know he will be a great Senator again. Blue America is proud to endorse him. We hope you’ll join us and give what you can to help put this man of conscience and integrity back in the Senate where he belongs.