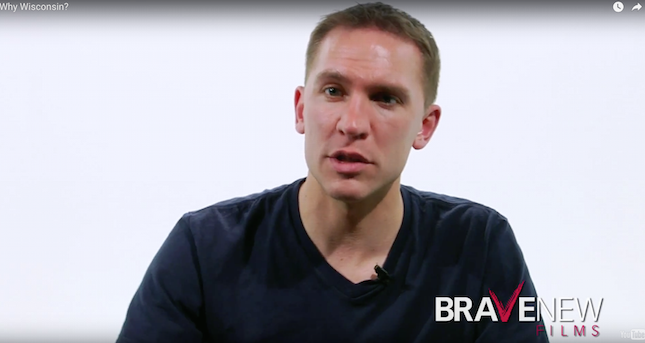 Tuesday, Wisconsin’s most progressive elected leader, state Sen. Chris Larson– the guy who led the Democratic senators out of the state rather than buckle under to Scott Walker’s Koch-ordered tyranny– came in first in a hard-fought, 4-way race for the second most important office in the state, Milwaukee County Executive. It’s an office that can lead to the governor’s mansion, as it did for Walker. The current County Executive, Chris Abele, the son of a billionaire, has worked with the Republicans to disadvantage teachers and the school system and to force struggling homeowners to bear the burden of $80 million in public financing to pay for the new Bucks arena.

When the Shepherd Express endorsed Larson, the editorial board noted that the general election on April 5th comes down to a contest between “Larson’s solid record of public service vs. a ton of Abele’s family’s money.” Abele, they wrote, “has consistently cut backroom deals on behalf of private special interest groups and on behalf of his fellow millionaire cronies at the expense of the average Milwaukee County taxpayers [and has] worked hard to impress and win favor from his mentor, Gov. Scott Walker… Since taking office in 2011, Abele has consistently worked to strip our local democratic institutions of their power and consolidate power in his own office, shutting out the public from debates and decisions.”

Abele, who vetoed a referendum on campaign finance reform, spent $2,000,000 in the primary to Chris Larson’s $100,000. He’s already said he’s willing to throw $5,000,000 of his father’s money– or even more if he needs to– into the April run-off against Larson’s grassroots campaign. Blue America endorsed Chris Larson and we’d like to ask you to consider making a contribution to his campaign here.

We also want to remind everyone to vote in Alan Grayson’s GraysonPrimary.com to cast a vote directing him whether he should use his super-delegate vote for Bernie or Hillary. Grayson:

”Until yesterday, ‘superdelegates’ were simply puppets of the unDemocratic establishment and their determination to snatch candidate selection away from our voters. Well, that’s no longer true. I’m a superdelegate. And I’m injecting a full dose of democracy into the superdelegate process, by letting actual Democratic voters influence who should win my superdelegate vote… In just 24 hours, more people have voted at GraysonPrimary.com than for Ted Cruz, Donald Trump or Marco Rubio in the Iowa Caucus. (Or Jeb Bush, but that isn’t saying much.) Our poll already has drawn well over 70,000 votes, which is . . . incredible. Democrats are sick of feckless loser party bosses dictating to us who carries our banner in November. Who do they think they are? That’s not their decision. It’s ours… It’s refreshing to see unbridled democracy in action. True power in the hands of the people is multiplying as we speak, and it is electrifying.” 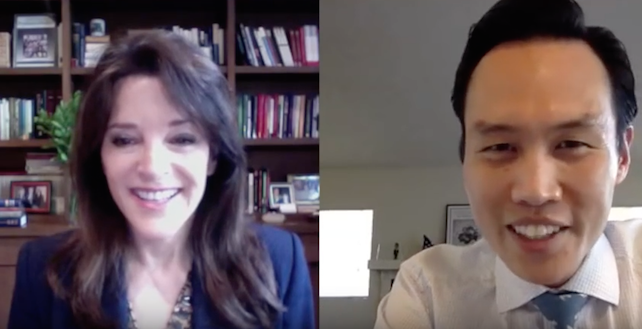 And that brings us to something Blue America is very excited to be doing with Marianne Williamson and Sister Giant, a free online Progressive Summit, which starts Tuesday, February 23. You’ll have a chance to meet many of the candidates we have endorsed and some we are thinking about endorsing. The purpose, though, is to emphasize the importance of congressional races in a year when the media talks almost exclusively about the presidential race. No matter who wins that race– hopefully Bernie or Hillary– Congress will function better with more progressives and fewer conservatives.

That what the Progressive Summit, which will last all week, is all about. Among the incumbents taking part are Alan Grayson (D-FL), Barbara Lee (D-CA), Keith Ellison (D-MN), Raul Grijalva (D-AZ), Ted Lieu (D-CA) and among the candidates, you will get to meet Tim Canova, the intrepid Florida progressive taking on Debbie Wasserman Schultz, DuWayne Gregory, who is taking on Peter King on Long Island, Alex Law, Nanette Barragan, Pramila Jayapal, Eric Kingson, Bao Nguyen and plenty of others. See you Tuesday? Register here at SisterGiant.com