Why Is One Of America’s Top Cancer Researchers Running For Congress? Meet Jason Westin 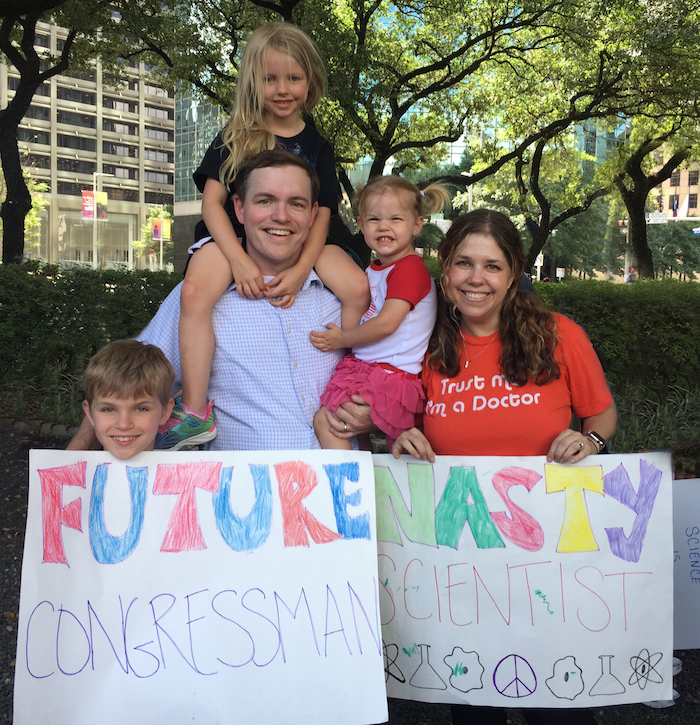 The DCCC hasn’t seriously contested Texas’ 7th congressional district since 1966 when George H.W. Bush beat ultra-conservative Harris Co. District Attorney Frank Briscoe (D) to become the first-ever Republican to represent Houston. It’s been a deep red district ever since… or at least until Trump came along and started waking people up. Last year Hillary beat Trump in this R+13 district– 48.5% to 47.1%. Trump did almost 13 points worse than Romney had done in the well-off, minority-majority west Houston congressional district.

This year there’s a crowded primary of Democrats eager to take on Trump and Ryan rubber-stamp John Culberson. Jason Westin’s enthusiastic and well-reasoned support for Medicare-For-All differentiates him not just from Culberson but from the other primary candidates running in his district.

After Dr. David Gill (IL-13), Jason Westin is the second politically progressive physician Blue America is backing in 2018. His experience as a cancer doctor has created in him a passionate belief that healthcare in a human right.

Below are excerpts from a guest post he wrote for DownWithTyranny today:

“In my career as a doctor, I’ve seen many incredible things across the full spectrum of the human experience. I vividly remember my first patient that recovered after a critical illness, and sadly my first patient that did not. As an award winning researcher at the top-rated cancer center in the world, I remember my first patient whose cancer went into remission on a clinical trial I designed, wrote, and lead, and others who were less fortunate. Those experiences motivate me to fight for my patients, to find new treatments and new cures, and to refuse to be satisfied with the status quo. The doctor-patient relationship is truly unique: patients share with their doctors things they would not tell anyone else, and in exchange doctors make decisions that determine the fate of their patients’ lives. It is an awesome responsibility.

Unfortunately, my ability to provide the best care for my patients is frequently not up to me. Too often my plans are blocked by a for-profit insurance company denying to pay for my patient’s treatment plan. Most medical practices have a large team dedicated solely to navigating the complex insurance claims approval process, often with seemingly random results. This makes healthcare less efficient and effective. The amount of time, effort, and money wasted dealing with paperwork or appealing denials of universally accepted standard care is truly astounding. How much money is wasted? The Center for Economic and Policy Research calculated that the American healthcare system spends over $100 Billion each year on private insurance overhead costs, 12 times more than Medicare spends on operating costs. This spending is completely wasted money that does nothing to make people healthier. If another industry found that it had a $100 Billion dollar per year inefficiency, it would be corrected faster than Mr. Trump could tweet about it being SAD! But for profit insurance companies have no motivation to correct this waste of their consumers’ money– it reinforces their stated need for high costs. The bottom line is this: insurance companies are motivated to maximize profits and bonuses for their executives, not to improve our health.

The Affordable Care Act, or ObamaCare, has been a step forward, but still leaves nearly 30 million Americans without coverage. Due to a refusal to expand Medicaid, the uninsured rate in Texas is 16%, the worst in the nation for three years in a row. Career Congressman John Culberson (R, TX-07) voted dozens of times to “repeal and replace” the ACA, and “absolutely” supported and voted for the TrumpCare bill. Sadly, despite seven years of sloganeering, Culberson has no serious solutions to our healthcare system. The ACA is not a perfect solution, but it did slow the rapid growth of healthcare costs. However, it has not impacted medication prices, use of treatments or testing are not of significant value, or lifestyle choices many of us make that lead to poor health. As a doctor, I know that we can do better.

I believe that healthcare is a human right and the best way to fulfill this duty is a “Medicare for all” single-payer system. Medicare and Medicaid cover nearly 125 million Americans, 33% of our population, but more can be done. The United States is the wealthiest nation in the history of the world, but is the only developed country without universal healthcare. Critics will ask “how can we afford a single-payer system?”. I ask, “How can we afford not to change our current approach?”. We spend more than any other country in the world per person on healthcare, over $9000 each year and rising, but rank 28th in healthcare outcomes according to the United Nations. Despite spending this fortune, we rank behind Andorra, Luxembourg, Malta, Cyprus, Brunei, and Solvenia. Why do we pay more for less? The price of prescription drugs, inefficiencies in insurance, and a lack of prevention and cure of chronic illnesses are all a part, and they are only getting worse. The United States healthcare system today reminds me of my patients from the Equal Access clinic: we know that our problems are getting worse, but we feel powerless to act. It is obvious that our current system of rising costs and mediocre outcomes is not sustainable, and the only viable way to improve our health and control our costs for the long term is universal healthcare.

If your doctor continued to use the same failing treatments over and over, you would find another doctor. Our leaders in Washington are elected by the people to lead, and if they refuse lead on healthcare, we should elect leaders who will. I’m running for Congress because I know that healthcare is a human right and that’s worth fighting for.”

My own oncologist, the doctor who saved my life, has worked on research with Jason and she vouches for him and has urged Blue America to help elect him to Congress. I’ve never known her to be wrong about anything.