Blue America first endorsed Rachel Ventura for Congress back in August. And now we’re coming up quickly to her primary (March 17) in Illinois’ 11th district, mostly suburbs southwest of Chicago and including Joliet, Naperville, Woodridge and Aurora.

She needs some love for her field program– turning out the voters, not just for herself. Her campaign is also turning out voters for Bernie and for the progressive candidates running down ballot. Please consider contributing to that effort by clicking on the Chicagoland ActBlue thermometer on the right. 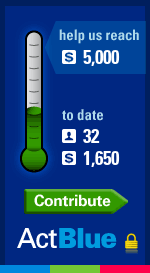 “We have watched corporate Democrats unite behind Joe Biden,” she told me, “and it is now time for progressives and populists to unite behind the one person who can defeat Donald Trump, and that is Bernie Sanders.

Bernie Sanders is the only candidate left standing who is giving poor people, people of color, women, and those who are marginalized by our political system, a strong voice. We need a candidate who gives people a reason to go to the polls in November if we want to win. From day one my campaign has been powered by supporters of both Bernie Sanders and Elizabeth Warren. I am asking those who supported Elizabeth Warren to join me in supporting Bernie Sanders.”

She told us that she feels for the people who worked so tirelessly supporting Elizabeth Warren. “I can identify with the women who still want a woman president and in my lifetime I will work to make that happen. A few days ago I participated in a Medicare for All townhall meeting and there were several women there who expressed their grief, and I encouraged them to move quickly and unite behind the only progressive in the race, Bernie Sanders. Former 2016 Sanders Delegate and 2020 Warren delegate, state Representative Will Guzzardi, didn’t hesitate to shift back to Bernie Sanders following Warren’s withdrawal from the race.”

She was then a guest of Ben Joravsky’s WCPT talk show to encourage supporters who wanted Warren to come out to Illinois’ 11th congressional district and canvass for herself and Bernie. “If we want Medicare for All, The Green New Deal, a $15/hour living wage, meaningful criminal justice reform, a pathway towards citizenship for undocumented people pursuing the American dream, or meaningful campaign finance reform, there is only one candidate left in the race. From now until March 17th our campaign will be knocking on doors for Rachel Ventura and Bernie Sanders. In Aurora we are helping Junaid Afeef who is running for States Attorney. In Naperville, IL we are helping Denika McMillen who is running for State Representative. In Bolingbrook, IL we are helping Dagmara Avalar and in Plainfield, IL Michael Crowner is the progressive choice for State Senate 49.” She continued:

“Working for progressive change needs to happen up and down the ballot and that is where we all need to be. We need to be united and continue to push for the change that we want to see in the world. “As someone who has battled the establishment and won, I feel confident that we will win if we are united. I also know, that as someone who has been a strong voice for the people on the Will County Board that voters genuinely appreciate being represented. When our campaign knocks on doors in the overlapping parts of the 9th County Board District it is always nice to hear positive feedback from voters who have followed my fights for clean water, fair taxes, affordable housing, higher wages and a sustainable future. I know that people also appreciate Bernie Sanders 40 years of consistency and tireless advocacy for the marginalized and people who our political system has forgotten.

“This is where I am most concerned with a potential Biden nomination. The Democratic establishment supported a corporate Democrat through the 2016 nomination process and they lost to Donald Trump. We cannot afford to make that mistake in 2020. We cannot afford 4 more years of Donald Trump. Bernie Sanders is the only candidate left standing who is speaking directly to poor people, people of color, women, and those who are not equally represented in our political system. We need a candidate who gives those people a reason to go to the polls in November, not the status quo. They deserve a candidate who will make it easier for everyday Americans to run for office through implementing policies like publicly financed campaigns and an end to citizen’s united.

“From day one my campaign has been powered by supporters of both Bernie Sanders and Elizabeth Warren. I am asking those who supported Warren to join me in supporting Bernie Sanders.”