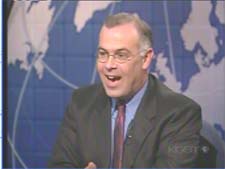 It’s always refreshing to hear a conservative pundit explain the liberal blogosphere to the world. He’s another Lieberman supporter who loves to attack bloggers to falsely spread nonsense about us. Has he commented on the right wing blogs that attacked Hariett Miers or Bush’s immigration stance? Hearing Democrats privately talk to Brooks about the blogoshere is the same nonsense that Robert Novak tried to peddle when he was on CNN.

Brooks: I find privately most of the Democrats despise those people…

David Brooks is qualified to tell us who is a Democrat?

Sorry David, Joe isn’t a Democrat any more, and Mark Shields effectively rebutted that claim, I thought. Shields pointed out a number of things from his discussions with real Democrats who actually live in Connecticut. This race is about more than the war, but that it includes a whole host of issues including his votes on judicial nominations, his support of Bush on so called "values" issues, and most importantly, his willingness to abandon the Democratic party if the primary doesn’t go his way. He also made the critical point that if Lieberman had been as aggressive in his debate with Cheney six years ago as he was with Lamont last night, he’d probably now be Vice President…read on

Brooks suggests that many Democrats silently fear and "despise" the netroots.

"Over the past few years, polarizers have dominated Congress because people who actually represent most Americans have been too timid or intellectually vacuous to stand up," writes Brooks. "Even today many Democrats who privately despise the netroots lie low, hoping the anger won’t be directed at them."

"The Keyboard Kingpin, aka Markos Moulitsas Zuniga, sits at his computer, fires up his Web site, Daily Kos, and commands his followers, who come across like squadrons of rabid lambs, to unleash their venom on those who stand in the way," wrote Brooks. "And in this way the Kingpin has made himself a mighty force in his own mind, and every knee shall bow."

In an appearance on The News Hour with Jim Lehrer on PBS the other night, Brooks gave a slight preview of his Sunday column.

"Because in my conversations –we’re talking about the netsroots [sic], who are the real problems for Lieberman, people generated by the Daily Kos and other web sites– I find privately most of the Democrats despise those people because of the way they practice politics so viciously that they don’t want to get in the crosshairs," said Brooks, according to a transcript in a Daily Kos diary.

"And they don’t want to offend the liberal base of primary voters," Brooks added. "So they want to support Joe Lieberman, but they don’t want to get in the crosshairs. So a few have come out, Barbara Boxer, Joe Biden, couple others have come out strongly for him, others, Hillary Clinton has sort of been on both sides, others just won’t commit."