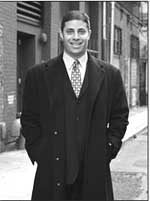 Gerstein has a problem with my friend, Jane Hamsher. Yes, Hillary Clinton blogged at FDL. It made sense: discuss equal pay on a blog that is run by strong, progressive women. I'm asking other candidates to come on our Blue America team to discuss other progressive issues as I blog right now and that has irked old Dan. I wonder how long it will take Lieberman's good pal Sean Hannity to pick up on this? He needs help. I'm starting a new 12-step program for politicos that have no political life left except to attack bloggers.

And he can't get his facts straight. Forget her movie credits, now Jane is best known for changing the way "trials" and events will be covered. FDL's live blogging of the Scooter Libby trial was incredible and she got a front page article from the NY Times about it. But he's not going to give credit to a top-tier blogger whose tireless work gave Ned Lamont the Democratic ticket in Connecticut, since it proved how out of touch Dan was with the Democratic voters in his work for Holy Joe. He's completely irrelevant to the netroots and what's new and refreshing in politics today and it makes him sulky. He's not alone.

I feel for you, Dan. I can help you if you let me. But the first step is understanding you've hit bottom and admitting you have a problem.

There are plenty of MSMers willing to give him some space on their pages so he can bash bloggers. That's all he has. He's left out in the cold, with no one around him except conservatives like Tom Delay. He talks about baggage, but he's still collecting a paycheck from Joe Lieberman. MSNBC should wake up and understand that we don't give a hoot what he has to say, especially when he has the audacity to chastise Democrats and defend Lieberman's devotion to Bush's failed occupation policy that has resulted in this good news:

A suicide bomber struck a crowd of funeral mourners Monday north of Baghdad, taking more than 30 lives at the end of one of the deadliest months of the war so far for U.S. forces. At least 104 American troops were reported killed in April.

The rising toll among Americans pointed to a potentially deadly trend: More troops exposed to more dangers as they try to reclaim control of Baghdad under the joint security plan being implemented by U.S. and Iraqi forces.

And we're supposed to be impressed with your silliness about bloggers? Human beings are dying for the causes you have promoted. I'm surprised TIME hasn't given you a job yet. Teddy at FDL writes about "Dangerstein":

Lieberman mouthpiece Dangerstein, concern troll extraordinaire, claims that Senator Clinton "invite[d] scorn and hypocrisy" by appearing at FireDogLake for a chat about pay equity:…read on

I'm going to email Dangerstein (dan@dangerstein.com) and see if I can at least reach out to him.

(Thanks to Nicole for her help)