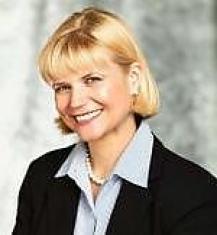 Last night we posted Pennsylvania Democratic candidate Sam Bennett’s favorite song and maybe there’s too much room for interpretation to get the idea of who Sam really is and why she’s the very best of what progressivism has to offer against the dark and deadly vision of a Bush Republican America. So how about coming over to FireDogLake this afternoon– 2pm- 4pm, EDT– and join Sam Bennett and members of the Blue America community in discussing how we’re going to build a Congress that really represents the people instead of the special interests.

This week we saw too many reactionary Democrats join the Republicans in resisting the majority who seek to end the occupation of Iraq and too many Democrats joining the Republicans in substituting action against Bush’s war agenda with action against American citizens who seek peace. Siobhan “Sam” Bennett is our kind of Democrat who will go to Congress and kick right wing ass– on both sides of the aisle. She’s an extraordinary fighter for Choice, for equality for all Americans, for peace and prosperity. 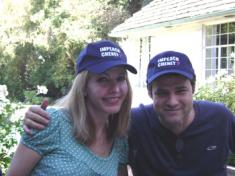 See that picture of John and Jane above? Those caps (here’s a link to the hats) ask the question, “Impeach Cheney?” Would you like one? Be one of the first 10 people to donate at least $30 to Sam Bennett’s campaign at our Blue America page and we’ll send you one as a thank you.