Another Republican Calling It Quits–Jim Walsh (NY-25) To Retire 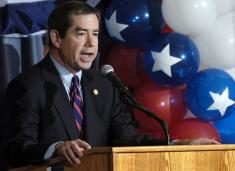 Rep. Jim Walsh said today he plans to retire from Congress at the end of his term in January 2009, ending a 20-year career in the House of Representatives.

“It’s time to go,” Walsh said in an interview this morning with The Post-Standard.[..]

Walsh had grown increasingly weary of attacks on his stand on the Iraq war, which almost cost him a re-election bid in 2006. He defeated Democrat Dan Maffei, of DeWitt, by about 3,400 votes. It was the closest election of Walsh’s career.

After returning to Congress last year, Walsh opposed President Bush’s troop surge in Iraq and later decided that he would support efforts for a gradual withdrawal of U.S. troops.

Walsh just narrowly held on to his seat in the last election. This sets up Democrat (and Blue America candidate) Dan Maffei very nicely. Howie has more…