What’s Up With Debbie Wasserman Schultz? 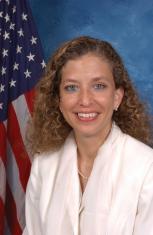 Debbie Wasserman-Schultz is one of those politicos that I can’t figure out. She was absolutely great taking down Chris Shays, terribly frustrating talking to Ed Schultz about impeachment, and now, she’s downright infuriating with her refusal to assist fellow Democrat Annette Taddeo over incumbent Republican Ilena Ros-Lehtinen, an even more heinous betrayal considering that Wasserman Schultz has a leadership position in the DCCC, whose job it is to — get this — increase the number of Democratic seats in Congress. AmericaBlog:

DavidNYC reports that leading House Democrat, Debbie Wasserman Schultz (DWS), still won’t help Annette Taddeo’s campaign. It’s ludicrous. Taddeo’s opponent is the Bush-loving, right winger Ileana Ros-Lehtinen. It’s especially galling considering DWS has a leadership role in the DCCC — and may even try to run that organization in the next cycle. So, you’d think supporting all Democrats running for Congress, especially those in her home state, wouldn’t be a tough call for DWS. But, it is. (Also, it should go without saying that supporting all Democratic House candidates should be THE main criteria for anyone in DCCC leadership.)

It’s not like DWS is lacking funds. Besides her own campaign account (where DWS is sitting on over half a million with no real opponent this year), she has a leadership PAC, Democrats Win Seats PAC (DWS PAC, get it?). Check out her list of expenditures here. She’s managed to contribute to a lot of House candidates across the country and to groups like the Ohio Democratic Party. But, she can’t help Annette? What’s up with that? If DWS wants to be a Democratic leader, DWS needs to help all Democrats — and not put her friendship with a Republican ahead of party loyalty. That’s not too complicated, is it?

Since Wasserman Schultz is a no-show on trying to turn this seat for the Democrats, won’t you consider donating to Annette Taddeo’s campaign through Blue America? At least we’re committed to getting more and better Democrats in Congress.