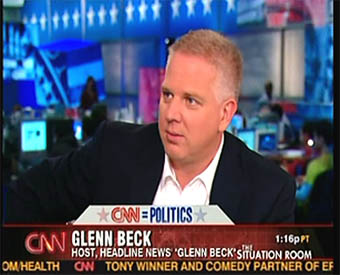 Well… not exactly. You see, Blue America joined the Color of Change advertising boycott of the crazed and demented Glenn Beck Show on Fox. Every time we run an ad campaign, we instruct all the networks to not run any Blue America spots on Beck’s programs. But they sometimes run them anyway. “Oh, no,” you think? Actually, it’s wonderful. Although he has a big– albeit stupid– audience, there are some people watching for the sheer hysteria and trainwreck quality of it all. So why wonderful? Well, every time they run a Blue America spot on his show, they refund the money. So we have his cake and eat it too.

Example, Blue America has spent nearly $100,000 this year making sure that voters in the 8 counties that make up the Arkansas’ Democratic heartland were aware of Blanche Lincoln’s voting record. More often than not, the vast majority of voters, anywhere, don’t really know much about their candidates. They knew Blanche was a “Democrat,” like FDR and JFK and Clinton and Obama… but not much more. And they have a pretty good idea about where Republicans stand when it comes to their attitudes towards working people. So Blanche benefited while she played footsie with the Chamber of Commerce and other right wing front organizations. Well, $100,000 in targeted advertising in just a few counties and go a very far way and we watched excitedly as Blanche’s re-elect ratings went down and down and down, not in Republican counties, but in traditional Democratic areas along the Mississippi. She’s unelectable now.

And last week we got another nice check back from our agency for $1,037 worth of ads that ran on Glenn Beck’s shows in Arkansas. Usually we just turn the checks around and buy more ads on MSNBC or BET, the Food Channel, USA Network, HGTV or CNN. But Blanche is toast; no need to waste any more money on that one. And besides, the labor unions and other groups have come to the party with 4 or 5 million dollars. No one will miss our $1,037. So… what should we do with it? How about using it to help defeat a couple particularly noxious Blue Dogs?

You have noticed that five of our 8 endorsed candidates so far this year are running in primaries against especially egregiously conservative Democrats. Regina Thomas is running against anti-healthcare Blue Dog John Barrow in Georgia. Connie Saltonstall is taking on anti-choice and C-Street cultist Bart Stupak in northern Michigan. Doug Tudor (D-FL) is up against the only non-incumbent Blue Dog to have been officially endorsed by the Blue Dog Caucus, reactionary Lori Edwards. State Senator Craig Pridemore is being challenged by a stealth establishment candidate and multimillionaire, Denny Heck, in southern Washington. And Marcy Winograd is battling it out with Blue Dog and notorious warmonger Jane Harman in Los Angeles.

Hopefully by now you’ve seen this ad our friends at Donkey on the Edge, Steve Foster and Sean Hanish:

We’re trying to get a 30 second version of this up on TV in eastern Georgia. It costs just $25 to run the ad on Anderson Cooper’s CNN show in Vidalia or in Statesboro. It costs $175 for Augusta. Of course in Augusta we can use a secret weapon to reach people– HGTV’s “Property Virgins,” which only costs $60. And I think the Colbert Nation will love the ad in Savannah where it costs $45 to run. CNN’s “Situation Room” is a good deal in Statesboro and in Vidalia ($25) and will work in Savannah ($65) and Augusta ($70) too. We’d really appreciate it if you’d help us by contributing whatever you can to the Blue America PAC itself. And, let us know who else you’d like us to do a similar ad for by giving them a contribution with one cent added on. That one cent will count as a vote. So…vote here. And in the comments section can you let us know what you think are the best places to advertise our candidates on TV. We’re not allowed to ask them– it’s the law– so we’re asking you.