The Republican Wing Of The Democratic Party

Steve Israel says he’s stepped down, but he still has his hand up Ben Ray Lujan’s bottom part. 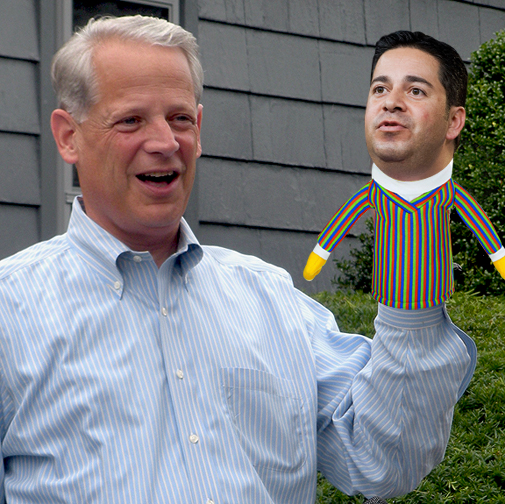 When I was growing up I always thought Labor Day picnics marked the beginning of the election season. Now it seems to be the beginning of the final stretch of a campaign that’s been raging for a year. We hope no Blue America members are focussing solely on the presidential race. Congress makes up a co-equal branch of government and if President Hillary is going to accomplish anything worthwhile– or if President Trumpanzee is going to be kept in check– we will need more progressives in the House and Senate. Today we want to take a look at the House and the candidates worth supporting… and the worst of the candidates worth avoiding.

It’s not that hard to figure out who the dozen worst House Democrats were this session. ProgressivePunch keeps track of all the votes and in a category called “crucial votes,” which doesn’t include any routine stuff like naming post offices, they rate every member on how he or she voted during 2015 and 2016. From horrible to even more horrible this is the worst of the worst among Democrats. (It’s worth noting that there are 5 Republicans whose records aren’t as bad as some of these Democrats!)

In terms of the House, that’s the heart of theRepublican wing of the Democratic Party– and, predictably, every last one of them is a Blue Dog or a New Dem. In fact, most of the Blue Dogs are also New Dems.

These are where Boehner and Ryan get their votes to make horrible GOP proposals “bipartisan.” These are the “Democrats” who want to kill Wall Street reform and gut Elizabeth Warren’s CFPB, for example. From this list comes the climate change deniers, the homophobic fanatics, the anti-Choice throwbacks, the TPP supporters and anti-healthcare kooks… the “Democratic” votes for almost any cockamamie proposal the Koch brothers and the extreme right come up with. Ryan knows he can always count on Henry Cuellar for anything– even more so than many members of his own party– and that if he can’t count on gay right-wing lunatics like Kyrsten Sinema and Sean Patrick Maloney to vote with him to penalize the LGBTQ community, at least they’ll always be there to help him give Wall Street a free hand to pillage the American people. These are the members with their hands out for special interest money from Big Oil, Big Pharma, from the pay day lenders and the most contemptible banksters and polluters.

But how do we know about candidates who haven’t been accruing voting records in Congress, the newbies running for the first time? Who will be the next batch of candidates for the Republican wing of the Democratic Party– all of whom the DCCC is trying to pass off as solid Democrats, even calling some of them “progressives” to trick voters who are too busy to learn the details on the garbage candidates the DCCC is offering this year. Well, it turns out there is a way– we can just dig a little and look to see who the Blue Dogs and New Dems are endorsing.

A candidate has to go to these organizations and ask for an endorsement and prove that they fit in and will be make-believe Democrats likely to help the NRA or the anti-Choice groups or the science deniers… any of the standard GOP fare, but most of all– first and foremost– that have to be Big Business-friendly and pro-Wall Street.

So far 19 Democratic candidates for the House have been endorsed by the New Dems and/or the Blue Dogs. Very few of them advertise that on their websites or mention it to voters in their districts. They just tell big campaign donors. Most of them hope to keep it hidden until after November. But we want to share the list with you… so you can use it when you decide how to vote (or not vote) in November. This year’s worst House candidates:

A bit of good news is that in two cases, bad Democrats can still be defeated without a Republican winning. Both are in California Democrat vs Democrat races and both are in the L.A. area. Garden Grove Mayor Bao Nguyen is running for the seat the Blue Dogs and New Dems are trying to capture with Lou Correa and Nanette Barragán is running against New Dem Isadore Hall. For the rest of these, you’ll have to make up your own mind if you want to vote for a fake Democrat likely to vote around half the time with the GOP on crucial issues or skip that line on your ballot. It can be a tough call for a lot of people. One thing, though, shouldn’t be tough– no matter how you decide to vote, don’t give anyone on that list of 19 conservaDems any money. Instead, please support Bao and Nanette and the other vetted progressives on the Blue America endorsement list. All of these candidates have won their primaries and will be facing conservatives in November and almost all of them are being ignored– or worse– by the DCCC.