No Exaggeration: The Survival Of Mankind 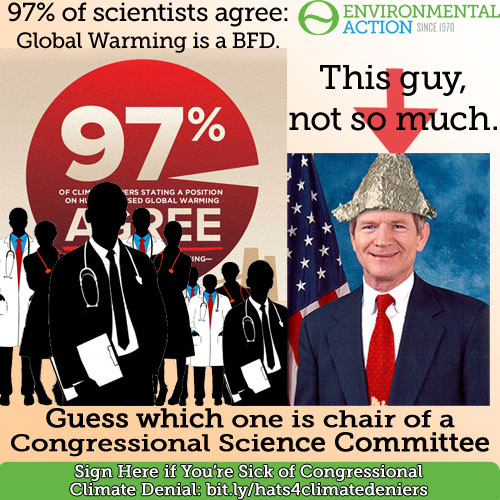 This week we’ve been working with our friends at ClimateHawksVote to win House seats for candidates committed to ameliorating climate change– candidates who are in winnable districts that the DCCC is ignoring. With Trump’s dysfunctional campaign and crude bigotry dragging down the whole ticket, it looks– for the first time this cycle– that the Democrats actually have a chance of recapturing the majority and retiring Paul Ryan from the Speakership. Imagine a House where Ryan’s willingly ignorant committee chairmen no longer set the agenda!

The DCCC doesn’t like taking on GOP committee chairmen. We do– and we are. Our candidates are all running, in part, to address global warming, combat the fossil-fuel industry, and support renewable energy. If climate hawks are part of a winning coalition that takes over Congress in 2017, we can work towards halting toxic fracking, towards stopping extreme-energy projects; we can start the work it will take to put a price on carbon pollution, and we can make sure subpoenas are sent to ExxonMobil instead of climate scientists. Our candidates want to invest billions in renewable, resilient infrastructure to restore climate justice and end the fossil-fuel economy– before it’s too late.

Taking back the House is a big challenge– Republicans currently hold a 30-seat advantage. But all across the country, Democratic registration is up and Trump’s continuous stream of bile is turning off mainstream conservative voters who are telling pollsters they won’t be voting for Republican candidates November 8.

That’s all changed now… and if we’re going to have a House ready to work on, for example, climate issues, it means taking back the House and not taking it back with Blue Dogs and New Dems from the Republican wing of the Democratic Party— the ones who opposed single-payer and the public option and stuck us with a very flawed Obamacare. So… please dig as deep as you can comfortably do and pick out a candidate or two— for the future of the country and the species and the planet.

Want to get a feel for how strongly our candidates feel about climate as an issue? Mary Ellen Balchunis told us yesterday that “While the Republican party is still debating whether climate change even exists, I am prepared to enact legislation that will reduce carbon output on day one. I will fight for a carbon tax while encouraging investment in clean, sustainable technologies to shape the clean energy economy. Beyond this, I will support public transit development and a modernized electrical grid, to make sure that we have the infrastructure to sustainably meet demand in the future. Unfortunately, my opponent Pat Meehan claims to care about climate change, but has voted to repeal the only carbon regulations on power plants, end research into the effects of fossil fuels, and even permit pipelines to run through our national parks and monuments. Pennsylvanian’s deserve a legislator who prioritizes a healthy environment for their children’s future ahead of oil and gas companies’ balance sheets.”

And our candidates have records of leadership on progressive issues. Take Nanette Barragan, for example. “While my opponent was filling his coffers with Big Oil special interests money from the most disreputable lobbyists in Sacramento,” she told us, “I was leading a successful fight to prevent the drilling of 34 oil and water injection wells in Hermosa Beach and into the Santa Monica Bay. If you care about climate change, retire Isadore Hall and send me to Congress. We both have records that are as crystal clear as the water still is off Hermosa Beach.” Does that sound like someone you want on your team, fighting for your issues? Her opponent, Isadore Hall, is one of Sacramento’s most corrupt legislators, a disgrace to a legislature that can’t wait to see him leave.

Paul Clements isn’t just one of the strongest advocates of climate change action of any candidate running for Congress, he’s up against the chairman of the House Energy and Commerce Committee, the Rep. who buries every climate proposal. “In this election, we have the opportunity to replace one of Congress’s leading climate science deniers,” he said. “Fred Upton has been called, appropriately, ‘Congress’s Number 1 Enemy of Planet Earth,’ and has been using his position to block any meaningful action on climate change. Congressman Upton has taken $931,000 from the oil and gas industry, and has used his role as Chairman of the Energy and Commerce Committee to keep energy companies from being held accountable for their actions, especially companies like Exxon and BP, in which he owns a quarter of a million dollars in stock. Despite his record, an outside group recently had the audacity to come into our district to promote Fred Upton as a ‘clean energy champion.’ The outrageous nature of their lies show just how important Fred Upton is to oil and gas, and how threatened they are this year. If Congressman Upton is reelected, we can expect two more years of obstructionism from Congress, and a dangerous lack of action on climate, our nation’s most critical challenge. I look forward to working in Congress to reverse the damage that has been caused, and prevent climate catastrophe.”

Tom Wakley is running against Science Committee Chairman and chief climate change denier, Lamar Smith. “What truly gets me worked up,” he told us, “is this idea that you have to ‘believe’ in climate change. The notion that it takes some great leap of faith in order to see and feel destruction or pollution is simply maddening. This is basically a matter of rejecting reality. There is no option when it concerns our climate. We have to act now. We must end fossil fuel subsidies and find market based initiatives to turn over a new leaf. There’s no going back if we continue to wait for the corruption to subside or wait for the oil to run out. Lamar Smith and anyone of his ilk must be retired. The livelihood of future generations depend on it.”

You want the government to deal seriously with Climate Change? Help us bring on congressional change.