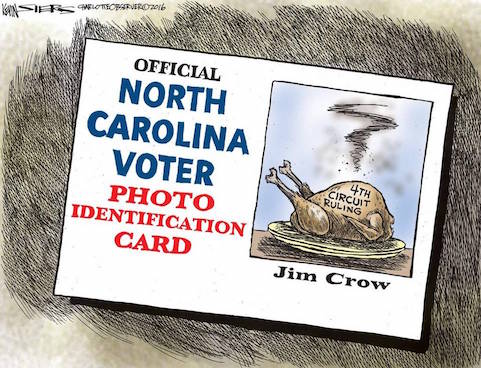 We want to make a different kind of case for our two progressive congressional candidates in North Carolina, Jenny Marshall– who’s opposing Virginia Foxx– and Matt Coffay– who’s up against Freedom Caucus headman Mark Meadows. Normally we’d tell you about how extreme Foxx and Meadows are (and they sure are– two of the very worst) and how awesome Jenny and Matt are (also a very accurate assessment). But today we want to make a special plea for the great state of North Carolina.

Our sisters and brothers in North Carolina are in deep trouble. As Michael Wines explained in the NY Times last week, the GOP has thrown away the rule book and is undermining democracy more overtly than any state in America ever has. The Supreme Court has ruled twice last month that the state’s election laws are overtly racist and unconstitutional. The state’s Republican leaders don’t care what the Supreme Court says and “since November, when Attorney General Roy Cooper, a Democrat, reclaimed the governor’s office from the incumbent Republican, Pat McCrory, Republicans have redoubled their efforts to keep the levers of state government and state courts in their control.”

The state Republican Party is not concerned with the rule of law– other than their own perverted and unconstitutional laws. “What we’re seeing in North Carolina is an effort at political entrenchment that is unparalleled,” said Allison Riggs, a senior staff lawyer at the Southern Coalition for Social Justice, a Durham advocacy group that sued Republican leaders over the election law. “It requires a complete disregard for the will of the voters and political participation, and a disregard for the independence of the judiciary.”

A special session in December stripped the governor of most power to appoint state employees and university trustees, choose a cabinet without legislative approval and install majorities on state and local election boards. The latter move was stayed, pending a trial.

Now the legislators are taking aim at the state judicial system. In December, after voters elected a Democratic majority to the nominally nonpartisan State Supreme Court, the legislature expanded the jurisdiction of the Republican-led Court of Appeals and made the legal path toward other Supreme Court hearings more tortuous. Last month, Republicans voted to shrink the Court of Appeals by barring replacement of the next three retiring judges, denying Mr. Cooper a chance to nominate successors.

Matt Coffay told us that “Last December, the Electoral Integrity Project– which has monitored and scored elections in 153 countries– ranked North Carolina’s election integrity score at 58 out of 100. This places us alongside Cuba, Indonesia, and Sierra Leone. But when it comes to our voting districts, we received a 7/100 score. As the Charlotte News & Observer reported, ‘North Carolina is not only the worst state in the USA for unfair districting but the worst entity in the world ever analyzed by the Electoral Integrity Project.’ The worst in the world. That’s where North Carolina stands.”

I have hope that the cases currently before the Supreme court– from both Wisconsin and North Carolina– alleging unconstitutional partisan gerrymandering will be decided in such a way as to force a fair redrawing of our state’s districts. But we have to keep talking about this issue, and keep fighting. When I’m elected to Congress, I intend to be a vocal critic of gerrymandering. Just like our broken campaign finance system, it dramatically endangers our democracy.”

North Carolina Democrats have been fighting back and organizing, but they cannot do it alone. The political temperature there is on fire– the people are hungry for the change Jenny and Matt’s representation can bring. If possible, please consider making a donation to their campaigns today.