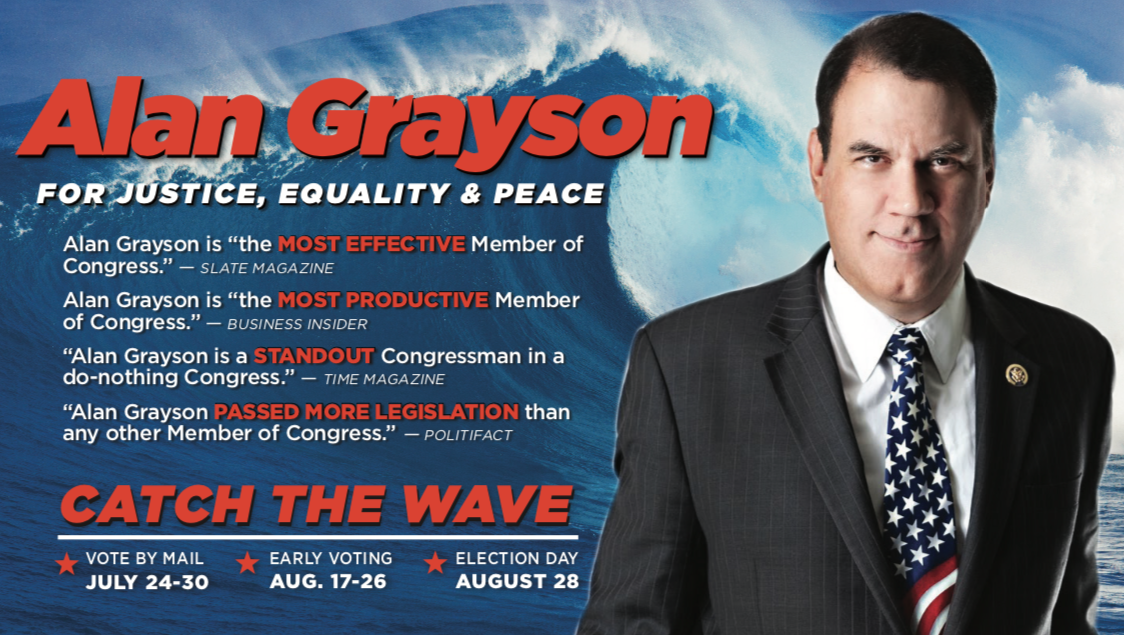 Let’s start with some news: Last week, Fox News’ James Rupert Murdoch, a British billionaire, put half a million dollars into one of Nancy Jacobson’s shady No Labels SuperPACs that aims to fill Congress with candidates from the Republican Wing of the Democratic Party.

Their current goal is a smear campaign against Alan Grayson.

Jacobson, widely considered one of the most vicious and destructive players in American politics, runs a dark web of 8 of the most pernicious and sleazy SuperPACs in the country, United for Progress, United Together, Forward Not Back, Progress Tomorrow, Patriotic Americans PAC, Citizens for a Strong America, etc, entirely funded by contributions from 5 and 6-figure right wing donors, such as Rupert Murdoch, his son James Murdoch, Chicago White Sox and Bulls owner Jerry Reinsdorf, hedge fund manager Louis Bacon, former Major League Baseball Commissioner Allan Selig and Wheels Inc. executive Jim Frank. 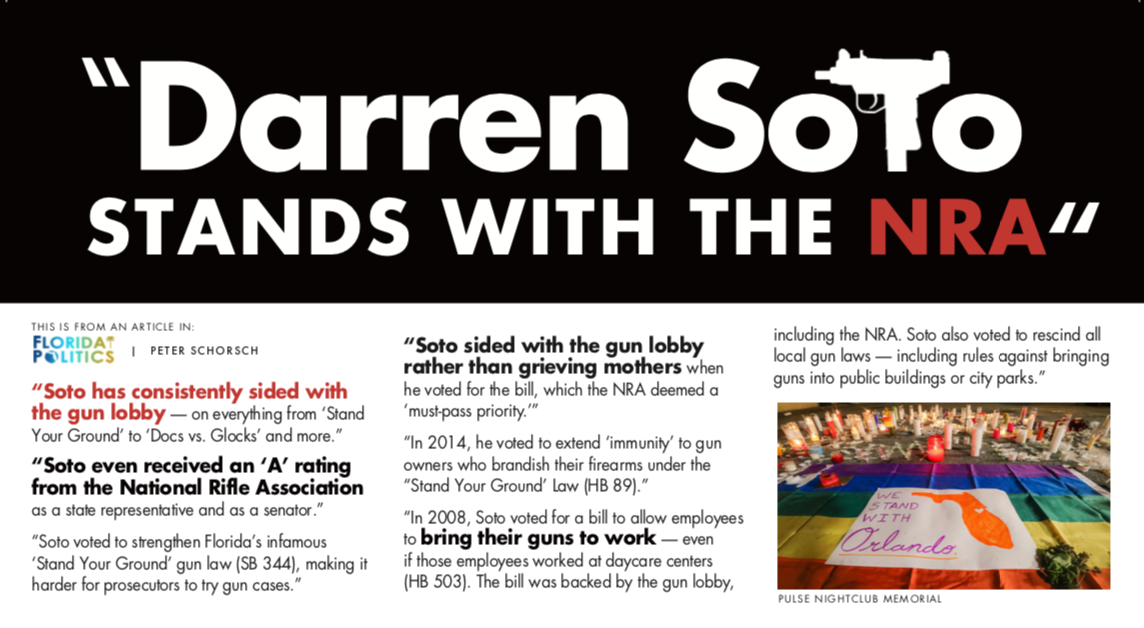 This cycle, Jacobson has also spent hundreds of thousands of dollars from Republican contributors trying to win Democratic nominations for far right candidates running against progressives. Recently she failed in Pennsylvania, where Susan Wild beat No Labels DINO John Morganelli and she failed in Albuquerque, where Debra Haaland beat the No Labels DINO, Damon Martinez. 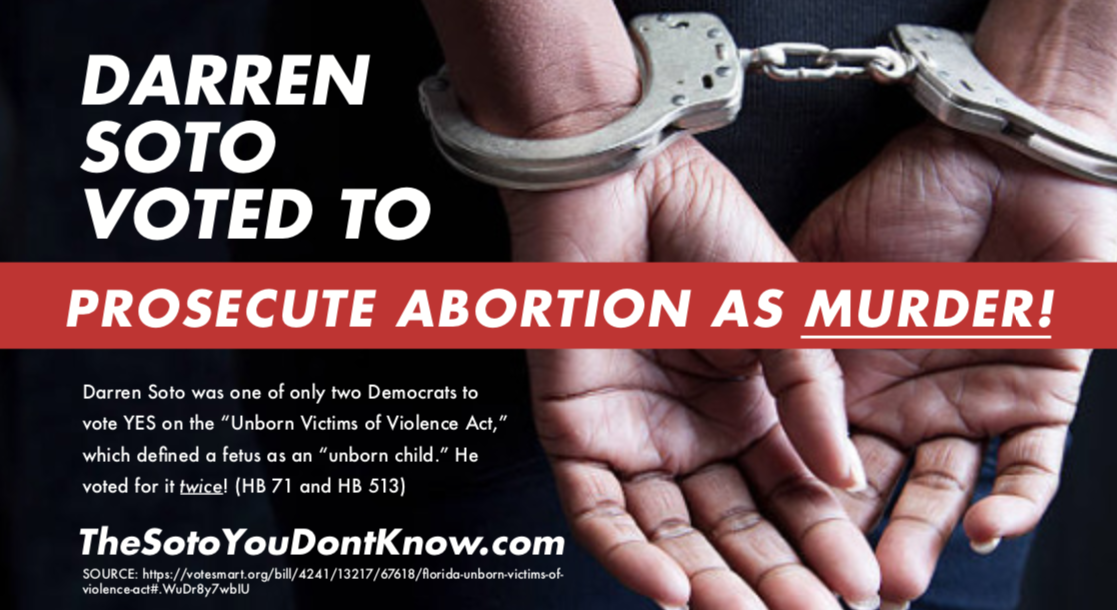 Darren Soto is exactly the kind of easily corruptible, fake Democrat Jacobson, the Murdochs and other GOP billionaires want to see beat progressives like Grayson. Soto voted to prosecute all abortions as murder and voted to force women who want an abortion to undergo a humiliating procedure called “transvaginal ultrasound.” Since being primaried by Grayson he’s been apologizing for those votes, saying he “made a mistake.”

He hasn’t apologized for the votes that earned him “A” ratings from the NRA– twice. And because of those hair-raising votes, the NRA endorsed him. He voted for Trump-sponsored laws 40 times in Congress and both times impeaching Trump came up in Congress, Soto voted NO. The reason No Labels is so enthusiastic about him is because he has said that he is “open-minded” about phasing out Social Security benefits or eliminating them altogether, No Labels top issue.

Meanwhile, Soto is one of Congress’ most corrupt Democrats, well known for partying with lobbyists, spending taxpayer money and campaign money illegally on personal items for himself and his wife. He has even accepted hundreds of thousands of dollars in campaign support from Trump’s Education Secretary Betsy DeVos and her charter school allies. Generally speaking he’s been a big waste of a solidly blue seat in Congress, accomplishing nothing for anyone… but himself. That compares badly with Grayson’s record: 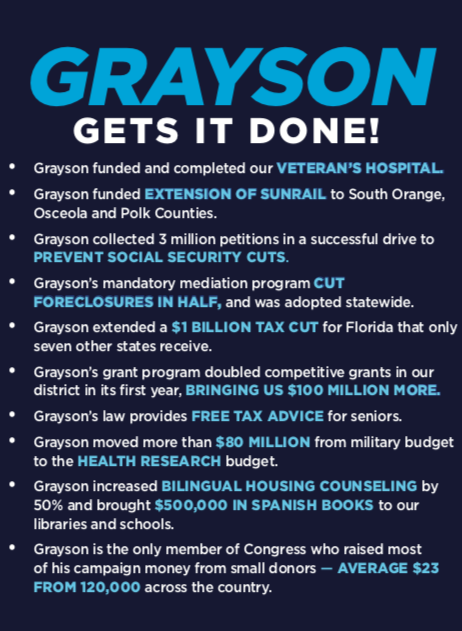 During a debate with Grayson last week, Soto claimed “to be a great champion of women’s rights,” a lie Grayson directly challenged, bringing up the specifics of Soto’s shameful voting record. Soto had no answer… except to say he regrets those votes. He doesn’t regret them enough to turn down the help he’s getting now from the anti-Choice extremists who are flooding central Florida with lies against Grayson and nonsensical assertions of Soto’s grandeur. 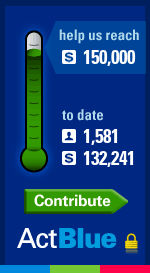 Blue America members have been helping Grayson with his election campaigns since 2006. And he’s never let us down— always one of the 2 or 3 best members of Congress and living up to his promises.

He needs us again now.The primary is August 28 and he really needs to get on the air and respond to the lies Jacobson and Murdock are flooding TV and radio with. Please consider contributing what you can by clicking on the Blue America 2018 congressional elections thermometer on the right.

As of yesterday another dark money PAC had bought ads on one of the big Spanish language radio stations– one ad every hour until election day! That’s called brain-washing. It’s what fascists do; it’s what Republicans do.

Republican billionaires know their party is going to lose control of Congress in November. So they are working to defeat progressives and make certain friendly conservative DINOs become the nominees of the Democratic Party.

We can’t let this happen. It’s our party, not theirs. 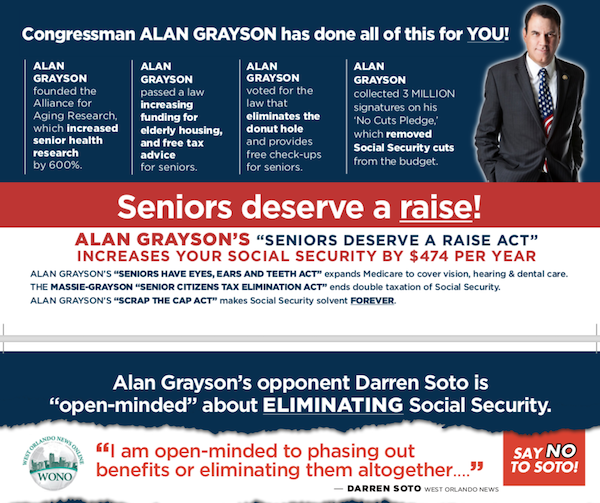 We are fighting to ensure that the most powerful media corporations on the planet treat the film and tv workers who produce their content with basic human dignity.

RT if you stand with us in this fight.https://t.co/mN96UCLF29