AIPAC has been one of the most venal forces in the 2022 election cycle this year, working with a handful of other shady players to launder Republican money into Democratic primaries on the side of conservatives.

AIPAC has begun spending money to attack former Democratic congresswoman  Donna Edwards as she asks voters to send her back to Congress in Maryland’s 4th District.

Edwards pushed back forcefully Friday– including with a virtual appearance from House Speaker Nancy Pelosi– against a $600,000 ad buy from the United Democracy Project. The super PAC has been inserting itself into races across the country, spending millions against candidates opposed by AIPAC, long the most powerful pro-Israel lobbying arms in Washington. The group’s attacks are virtually never related to Israel policy.

As all– 100%– of the AIPAC ads that have been run this cycle do, it flat out lies about Edwards’ record.

One member of Congress who supports Edwards told me that she’s been watching the pattern and has noticed that AIPAC tends to project the weakest things about the candidates it supports– in this case Glenn Ivey, who Edwards has beaten before and is leading this time– onto the candidates it attacks. “They are the most deceitful SuperPAC playing in Democratic politics, more like a Republican group than a Democratic group,” she told me Friday.

At a news conference Friday, Edwards said the ad “lied about my record” and that her Democratic opponent, former Prince George’s County State’s Attorney Glenn Ivey, “knows he’s losing and now he’s desperate.” Ivey has been endorsed by AIPAC.“My opponent’s got his dark-money super PAC. I’ve got grass-roots support. And you know what? I like those odds,” Edwards said. “I have to tell you a thing about Black women that many of you know already: When you come for us, we don’t run. We double down and we get the job done.”

This morning, I reached out to one of the sharpest and most effective young political operatives of the 2022 cycle, Morris Katz, who has worked with several progressive campaigns that have come under vicious attack from AIPAC and DMFI.

“AIPAC,” explained Katz, “is on a mission to destroy the Democratic Party from within. It’s a front for GOP billionaires and corporations to smear progressive women of color and interfere in our primaries. They pose an existential threat to American Democracy and it’s critical that we have Congresswoman Edwards’ back as they try to steal this election.”

Pelosi seems upset that AIPAC has gone rogue and is attacking outstanding Democratic incumbents and attacking Donna Edwards, who she worked closely with in the past. But she should have thought more carefully about what she was doing when she allowed Hakeem Jeffries to weaponize AIPAC and DMFI against progressives like Jessica Cisneros, Michelle Vallejo, Summer Lee and Nina Turner, at least two of whom beat back the AIPAC barrage of GOP sewer money and are on their way to Congress. 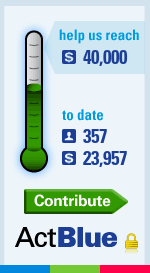 I spoke with a member of the Congressional Black Caucus last night, a former colleague of Edwards’, who told me that Donna was a “principled progressive with a coherent liberal ideology, which isn’t that common among CBC members… Some Members admired and respected her, others weren’t particularly thrilled about her [political] independence.” As of the March 31 FEC reporting deadline, Ivey had raised $721,081 and Donna had raised $625,191, although she actually raised more than he did when you don’t count his self-funding efforts.

Blue America has endorsed Donna again— as we have from the very first two races she ran and defeated conservative Democrat– now sleaze-ball lobbyist— Al Wynn.

Please consider clicking on the Elect Donna Edwards thermometer and contributing to her campaign.