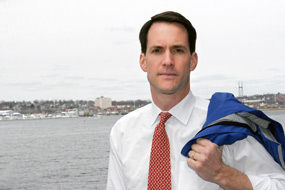 Jim Himes is our Blue America candidate today. We’re trying to help him overcome rubber stamp Republican incumbent Chris Shays in southwest Connecticut. He’ll be live blogging at Firedoglake today at 2pm, EDT. But we also asked him some non-political questions that might help put him in some kind of context.

He’s a huge blues fan; loves classic Muddy Waters, Nina Simone, Buddy Guy, more recently, Ben Harper. But the song he picked out for Crooks & Liars fans, his own all-time fave: Baby, What You Want Me to Do? by Etta James. Two of his favorite authors are Wallace Stegner (Angle of Repose and Crossing to Safety) and Mark Helprin (novel only– like Winter’s Tale and Refiner’s Fire). Right now he’s reading Drew Westen’s book, The Political Brain, the premise of which is that we make our political decisions with our hearts more than our brains. Since starting to campaign, Jim hasn’t had a lot of time for TV but he is a huge Jon Stewart fan– watched The Daily Show every night– and a West Wing fanatic too. Don’t forget to come over and meet him today at FDL and if you’d like to see a progressive Democrat who opposes the occupation of Iraq representing CT-04 instead of a classic Republican WINO, here’s your chance to make a difference.