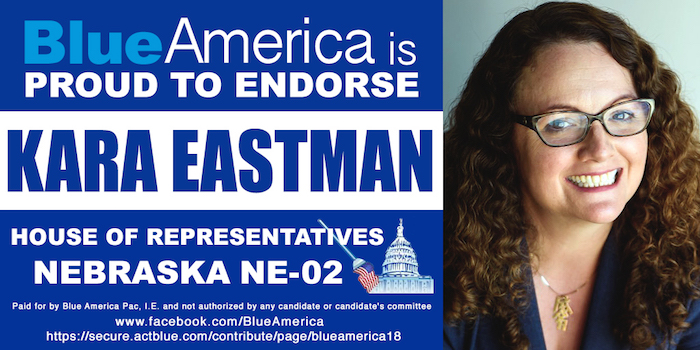 Kara Eastman is the newest Blue America endorsee. She’s running for the blue-trending Omaha Metro district– NE-02, currently tenuously held by conservative backbencher Don Bacon. Before she gets to Bacon, she has to beat conservative “Democrat” Brad Ashford, who was a Republican for 38 years, including the first term of the Obama administration.

According to the Omaha World Herald, Ashford voted with the Republicans while in Congress more than all other Democrats except for two. In the Nebraska legislature, he voted for an ultrasound bill and voted yes on LB 1103, a bill that prohibited abortions in Nebraska after 20 weeks. He’s taken contradictory stands on almost every important issue over his long political career. Ashford voted for and against the Dreamers, for and against the Iran nuclear deal, and against the Clean Power Plan rule (SJ Res 24) that established carbon dioxide emission guidelines for power plants. Under Obama, he voted against facets of the Affordable Care Act, in the Nebraska State Legislature he voted for some anti-choice bills, and he has gone back and forth on his stances on the Keystone XL pipeline. People in the district tell me they are unhappy with Ashford’s voting record. They also feel like he is not in it to win it.   Word on the street is, Nebraskans are looking for someone with energy, with vision and with passion.  Knowing this, even with a record like Ashford’s the DC Dem’s establishment candidate enjoys the backing of the entire ‘Republican wing of the Democratic Party’— the Blue Dogs, the New Dems and, of course, the DCCC.

Kara’s primary fight has been based on convincing voters that her pragmatic, progressive stances make her a stronger candidate. We cannot agree more! The Democratic primary election is on May 15.

She told us that with a grassroots campaign focused on field operations, door-knocking, an integrated digital and communication plan, and engaging voters; her campaign is speaking directly to real people. She and her volunteers have knocked on over 25,000 doors already. Women, labor unions (she just received her fourth labor endorsement), activists, and communities of color that have been disenfranchised by conservative candidates and are crucial to winning NE-02. Her bold advocacy is motivating and energizing the Democratic base, and it’s already been recognized in the form of a national endorsement from Climate Hawks Vote and now from Blue America. This is a district that can be flipped.

“are frustrated. We’ve run the same kind of ‘moderate to conservative candidate’ at the local, state, and federal level, and we’ve seen them lose over and over again. Even though my primary opponent won by a slim margin in 2014, he lost his re-election bid in 2016. As a matter of fact, he was the only incumbent Democrat to lose to a Republican in the entire country that cycle. Don Bacon, who won by just over one percentage point, now votes in line with the current administration 97% of the time. He’s vulnerable, and all the political prognosticators say that the election is a toss-up. Over the last decade, Nebraska’s second Congressional district is one of the two most competitive in the nation. So why can’t Democrats consistently win here? They don’t ignite the base, and they don’t go out and talk to voters.”

She’s the first serious progressive candidate to run in Nebraska’s second district and her grassroots campaign has knocked on over 25,000 doors and has gotten voters excited about the race. She told us that,

“the majority of the people we talk to at the doors commit to voting for me. I’m pro-choice, I support common-sense gun safety regulation, I’m passionate about health and environmental protection, and I’ve opposed the Keystone XL pipeline. I will fight for a Medicare for All system because healthcare is a right. I also will fight for debt-free education, because I’m tired of seeing students, even at Metro Community College where I serve on the Board of Governors, drowning in student loans. The U.S. has to compete in a global market by investing in green and healthy housing. Climate change is the number one moral and national security threat to our children, and we need to address it now.”

Kara is good on all of our issues and we’re excited about her campaign because we see her as someone who will be an aggressive champion for campaign finance reform. “Fixing campaign finance laws and taking lobbyist money out of politics,” she said, “will change Washington. I’m proud to have over 1500 individual campaign donors, but I won’t take just any and all corporate PAC dollars. In fact, my fundraising has been neck and neck with that of my primary opponent, even though he’s been in Congress and accepts a large amount of PAC money.”

With the strong grassroots campaign that she’s built, Kara Eastman can win this swing district. As a social worker with a reputation for getting things done in her community, she’s ready to work hard to make real changes in the political system when she gets to D.C. We believe in Kara’s campaign and we urge you to contribute what you can. It’s strong, idealistic women with real life experience like Kara who are going to change America, not decrepit, recycled, reactionary Blue Dogs dumped upon us by a corrupt establishment.

Thanks for always doing what you can to make this a better world,
–Howie, for the entire Blue America team

Native American lands are owned and controlled by Native Americans, & they should be able to control enforcement and what goes on on those lands.