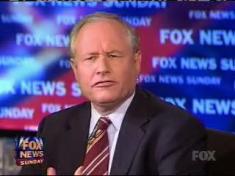 A day after the Huffington Post first reported it, The New York Times has announced that it has indeed hired conservative pundit, and Fox News analyst, Bill Kristol, as a new regular op-ed columnist.

Liberal bloggers had been up in arms over the move. Kristol said, in an interview with Politico.com, it gave him some pleasure to see their “heads explode.” Kristol was perhaps the most influential pundit of all in promoting the U.S. invasion of Iraq and has strongly defended the move ever since.

Times’ editorial page editor Andy Rosenthal defended the move. Rosenthal told Politico.com shortly after the official announcement Saturday that he fails to understand “this weird fear of opposing views….We have views on our op-ed page that are as hawkish or more so than Bill….

“The idea that The New York Times is giving voice to a guy who is a serious, respected conservative intellectual — and somehow that’s a bad thing,” Rosenthal added. “How intolerant is that?” Read on…

This will do little to convince their readers that he didn’t just make a huge mistake by hiring a pundit who has zero credibility and is one of the biggest hacks in all of wingnuttia. Mr. Rosenthal, it is not intolerant of the American people to want truth and accuracy from the supposed paper of record. It’s not about having opposing viewpoints, it’s that Kristol has been wrong on just about everything he’s said for the past five years. Not a little wrong, but really, really wrong. But according to Rosenthal, he’s really serious and gee, people really respect him. Well, I guess that makes up for all of the propaganda…war-mongering partisanship…hackery that Kristol has been given a national platform for already.

Maybe we should take a look back at the very serious and respectable prose of William “The Bloody” about his new employers:

Conservatives, populists, humorists, smart alecks, men and women of good will everywhere, including even a few Blue America types–in sum, a solid majority of our fellow citizens–are enjoying the misery of the New York Times. It is hard not to relish the sight of smugness shown up, pomposity punctured, and self-righteousness smashed.[..]

Even if (former Editor in Chief Howell) Raines were to go, everything we know about Sulzberger suggests his next pick would be no improvement. Fundamental regime change at the New York Times is not in the cards. Inspections and sanctions won’t work. Even the French can’t help. The Times is irredeemable. The question is whether a new newspaper of record will replace it.[..]

More important, this new paper would serve its readers by producing serious “news analysis” on the leading stories of the moment, not unintentionally comical meditations by disengaged semi-retired reporters.

Furthermore, this new paper wouldn’t create in its own ranks a “culture of fear.” Its reporters and editors would speak their minds among themselves, without concern that a minority viewpoint might cause them to lose favor. [..]

Finally, this new paper would have a culture of accountability without favoritism, and responsibility without defensiveness–the opposite of the current Times regime.

And how about this:

“I think it is an open question whether the Times itself should be prosecuted for this totally gratuitous revealing of an ongoing secret classified program that is part of the war on terror.” [Fox News, 7/2/06]

“I think the Justice Department has an obligation to consider prosecution.” [Fox News, 6/25/06]

And Rosenthal thinks we’re the intolerant ones. Heh.