Florida Is A Big Part Of America’s Future

Having recently surpassed Massachusetts, Pennsylvania and Georgia, Florida has the 6th most cases in the country and by Monday or Tuesday will overcome Illinois to take the number 5 slot.

From the very beginning of the pandemic, Florida Governor Ron DeSantis seemed to be determined to go down in history as the worst governor in the nation. Early on, in fact, he was the only governor who was judged by his state’s residents to be doing a worse job than Trump (albeit, just by one percentage point).

The state legislature that so many of them crawled out of, is, if anything, even worse– useless, pointless, leaderless… utterly uninspiring. Yes, the Republicans are worse, but at least the Republicans stand for something, something evil and destructive, for sure but something. Aside from careerism, incumbent-protection and identity politics, what do the Democrats stand for?

It’s time for this to change– and change profoundly. This year, despite the party establishment, there are lots of truly excellent candidates running for office up and down the ballot as independent-minded progressive Democrats. 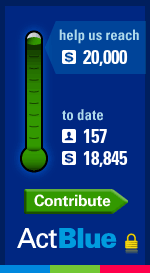 So… this is a brand new Blue America thermometer– Up And Down The Florida Ballot— and you can use it to contribute to progressive Florida candidates running for Congress, the the state Senate and for the state House.

Many were recruited from the state’s vibrant environmental movement and are running against Republican incumbents who have never been challenged for reelection before.

As I mentioned in the page description, “Florida is the third biggest state in the country– and if California is blue and Texas is red… it’s Florida that frequently decides elections. Yet the Democratic Party is weak, status quo-oriented and atrophied. Let’s make it strong and powerful and an agent of change, rather than a tool of Debbie Wasserman Schultz’s.

And let’s make sure the Republicans aren’t able to put all their voter suppression tactics into play going forward.” Consider clicking on the thermometer and contributing to build– above all else– a strong Democratic bench going forward so we’re never stuck between supporting just the lesser of two evils. And let’s make sure the Sunshine State never gets stuck with someone like Ron DeSantis again.

Good to see the committee out defending their witnesses. https://t.co/Rr5O5se4jK