Tancredo gets his “Hate” on 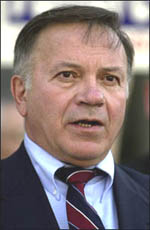 Rove has shown a positive genius for organizing campaigns around poisonous trivia. He will question the patriotism of Democrats (and, once again, be aided by those on the noisome left who believe that the U.S. is a malignant, imperialistic force in the world). He will deploy an ugly, stone-throwing distortion of Christian "values," especially against those Democrats who choose not to discriminate against homosexuals. And if things get really desperate, he will play the race card, as Republicans have ever since they sided against the civil rights movement in the 1960s.

On the ground floor, a United States Army brass band commemorated the victims of 9/11. One level up, not far from the museum’s permanent Confederate Army exhibit, the state chapter of the League of the South (LOS), a neo-Confederate hate group, hosted a barbecue in honor of Colorado Congressman Tom Tancredo, head of the House Immigration Reform Caucus and likely contestant in the 2008 GOP presidential primary. Proceeds from the $15 per-plate fundraiser went to Americans Have Had Enough!, a South Carolina-based non-profit coalition for which Tancredo serves as honorary chairman.

While Tancredo’s hard-line "deport ’em all" stance on immigration has made him a favorite politician of white supremacists, this marked the first time the congressman has appeared at a hate group event…read on

The Macaca syndrome is no accident…As a reminder, Remember when Tancredo liked the idea of bombing Mecca?

“Well, what if you said something like — if this happens in the United States, and we determine that it is the result of extremist, fundamentalist Muslims, you know, you could take out their holy sites,” Tancredo answered. “You’re talking about bombing Mecca,” Campbell said.

Bill Winter, his opponent is one of our Blue America candidates.